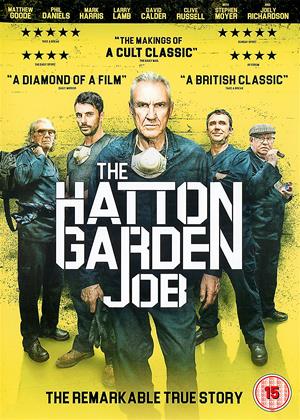 Reviews (6) of The Hatton Garden Job

Not Brilliant - The Hatton Garden Job review by JN

I found this a boring and tedious. The highlight of the true story was the hole they drilled through the vault wall. In the film the portrayal of this dragged out interminably. It was like watching paint dry, excuse the pun. Knowing the story there was very little drama licence or sense of jeopardy to make it anyway compelling viewing

I enjoyed the movie but expected more. It was very much a Channel 4 type film, suppose being a true story limited content.

Well made film - The Hatton Garden Job review by RT

I enjoyed this film very much. Of course we all knew the outcome of the story but it was told in a well thought out manner, concentrating on the actual raid and the preparations associated with it. The incredible period of work over the Easter weekend was told with just the right amount of tension to make the story exciting.

Although you know the outcome, there is still a good degree of tension, and this is well worth watching - unless you don't like cockney villains, in which case avoid it. The issue of the "mystery" gang member is well handled.

Mediocre, boring Britflick which is like a Poundland 'Sexy Beast'. - The Hatton Garden Job review by PV

This film is trying - very trying - and trying way too hard to be like LOCK STOCK AND TWO SMOKING BARRELS for pensioners.

It's a so-so watch but does look rather amateurish and some of the 'actors' haven't seemed to bother about acting at all.

For a truly great movie which also features bank vault robbery and cockney crime life, watch SEXY BEAST - which is as brilliant as this film is boring.

It has its place and passes the time, but don't expect too much because you won't find great entertainment here!

Thought the cast were interesting and was looking forward to the film. Unfortunately it doesn't work on any level. The screenplay rambled, characters had little or no connection, music and editing just plain dreadful....I'd really like to say there was something redeemable but there wasn't. Even wife and kids commented on how uninteresting it was. AND....no tension whatsoever. Please do yourselves a favour and do something else...like watch paint dry!