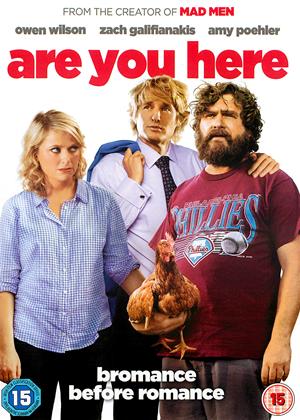 Reviews (1) of Are You Here

Disappointing - Are You Here review by Lou

I thought this would be a good film judging by the cast but I must say it's a real stinker! After watching two thirds of it we gave up as things weren't getting any better. Too much swearing, poor use of script.

Are You Here review by Mark McPherson - Cinema Paradiso

Are You Here is a comedy more frustrating not because it’s just another half-thought goof fest for the likes of Owen Wilson and Zach Galifianakis but because it has the audacity to touch on a societal nihilism for little more than existential fluff. Here is a film that asks what is the point of it all and rather than weave in some more profound examination of trying to find one’s purpose, the story merely dances around these topics for family drama, love triangles, and a meandering plot about how to spend inheritance. Rarely have I seen a comedy so brazen to use bold questioning of environmental change, vegetarianism, humanitarianism, and spirituality, only to say nothing in the end.

Perhaps if there were something more to the characters and their plights the empathy would come a little easier in that confusion. Wilson plays a weatherman who is a mess of a man, sleeping with prostitutes, doing drugs, and showing up late for work. He should be fired for all of this but always seems to land on his feet, even when he eventually decides to chop his own off to escape. He tries to quit amid his existential crisis and is offered an anchorman position. “What does a guy have to do to get fired around here?” he asks his boss. His boss only shrugs. Whatever the script requires, I suppose.

What leads him to make such a rash decision is after an experience he undergoes with his best friend played by Galifianakis, a bearded wanderer who seeks enlightenment from a bunch of babble he most likely absorbed from too many TED Talks. He doesn’t eat meat, questions the corporate structure, and desires something more out of life. When his father passes away, he’s crestfallen and relies on Wilson to help him out. He’ll need that help as well when it’s discovered that dad’s last will leaves the entire farm estate to Galifianakis, “assuming he gets his act together.”

This doesn’t sit well with Galifianakis’ sister played by Amy Poehler, bitter about not getting that money, fatherly enough, and not being able to have kids. So she fights for the property and tries to come to terms with herself in the most lukewarm of dramatic scenes which strive for that awkward dead zone between laughs and depression. She at one point asks an Amish man what he would do if he couldn’t have children. He says he’d pray to God to deliver them. She asks what if she doesn’t believe in God and he gives the only answer he knows how: “Maybe that’s your problem.” Wow, that’s deep. Slap in some anti-abortion and freedom of speech nonsense and you’ve got yourself a Pure Flix Christploitation picture right there about finding Jesus.

Running nearly two hours, the comedy spins a lot of wheels that go nowhere, serving the base purpose of having friends and family bicker over money, love, and the world. Wilson seems to get an absurd amount of women naked in bed for being a merely aged weatherman. I thought in the goofy logic of comedies weathermen were generally despises for ruining weekends with off-estimates. Not in this world. In this world, weathermen who look like Wilson can not only get a gander of a nude woman across from his apartment but she’ll show off as well, proud to be ogled from afar. Galifianakis continues to spout off nonsense about trying to heal a dying world and seek purpose but it all ultimately needs nowhere with a bitterly empty ending to his arc about understanding the world. And while I adore Poehler’s previous performances, her grouchiness present here is more dour than downright comical.

Even for a film where Wilson chases around a chicken he has to murder for dinner, the laughs come few and far between for Are You Here. Perhaps an argument could be made that it wasn’t supposed to be funny, meant more like a family drama that touches on deeper philosophies. I’d probably think so too if the high-school version of myself were to see this film, more so to agree because of the abundance of naked women in the film. Now that I’m a little older, I agree more with Wilson’s assessment of the world when he finally spies on that nude woman when an obstructing tree is removed for the view: “It wasn’t worth a tree.” It wasn’t worth two hours either.