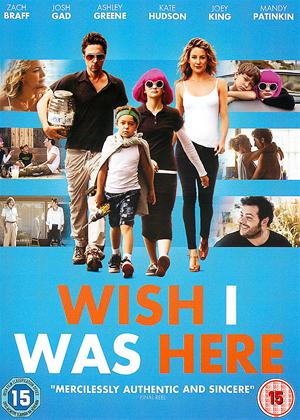 Reviews (2) of Wish I Was Here

All about yet another disfunctional american fakily, who you really have no worries if they go up, or down. Do they really swear so much in normal family groups?

American film industry do not portray themselves that well.

Fills the time, but wouldn't have been happy to have paid good money in a cinema.

This is basically a movie about growing up, as two sons cope with the impending death of their father.

Do not be put off by the sweary start - the film's weakest point is the first 10 minutes or so.

There are some laugh our loud moments in this movie, and some quirky and funny characters and scenes. Even the fantasy sequences work well - not always the case in films like this.

There are enough subplots - rabbis, a creepy work colleague etc - to keep the interest. Those without knowledge of Jewish culture may be baffled at times, however.

Ultimately I found this a very funny and moving movie. Not perfect, and clearly on a budget - and the same Jewish guy stars, directs, produces, makes the sandwiches etc.

But much more enjoyable than usual Hollywood fare.

Wish I Was Here review by Michelle Sommerville - Cinema Paradiso

There is no denying it: Zach Braff is a phenomenal filmmaker. Continuing on from his Scrubs fame, and the massive success of Garden State, comes Braff’s newest film. After failing to find a distributor, Braff turned to the crowdfunding website Kickstarter. By allowing the general public to essentially purchase merchandise and experiences, the film was fully funded within 48 hours. For those that have not see it, make sure you add it to your list.

Wish I Was Here is about Aidan Bloom (Braff). He is a man in his thirties who is still struggling to combine what he wants from his life, with the life that he has. Aidan is not the only one suffering, with his breadwinner wife being harrassed at work but unable to quit, and his sick father unable to continue paying for their kids to attend private school, meaning Aidan must now homeschool his children. Through teaching his kids, Aidan must find a way to learn about the world, and himself.

Like I said before, this film is amazing, and that is for many reasons.

If you just want a film to make you laugh or for car chases, then this isn’t the film for you. The film is full of emotion. One moment you will be wanting to cry, and the next you’ll be chuckling.

We know that Braff is a brilliant actor who can probably play any character he ever wants. His adult co-stars - Kate Hudson, Mandy Patinkin, Donald Faison, and Jim Parsons, to name a few - were all great. The length of their roles varied, but each one brought something more to the story. The kids - who both have quite extensive film resumes - make you feel bad about yourself, because you weren’t as talented as they are at such young ages.

Music is an element of film that is vital, yet often overlooked. Braff’s grasp of music is amazing. Like with his previous film, his music choices and placement furthered the story, and heightened the emotions.

Being an ‘arty’ film, it may not be for everyone, but there are sure to be a lot of people that will love the film. At times I have seen independent films like this, and felt they were trying too hard to be edgy and they only end up failing miserably. You can be sure this is not the case with Wish I Was Here.

Unfortunately, reviews haven’t been overly positive. While there are those that do see it for the brilliant film that it is, others have commented that it is too simplified and generic.

This may sound like a gush-fest...and that’s because it is. There are so many films that have earned millions of dollars that are nowhere near as fantastic as this one is, and are only popular because supposed ‘A-Listers’ are in them. When you can shout your support for a meaningful film like this, you pretty much have to.