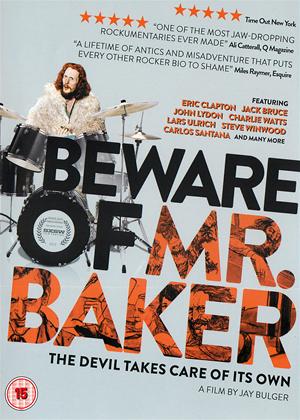 Reviews of Beware of Mr. Baker

Beware of Mr Baker, a documentary about Ginger Baker, the abrasive lead drummer of Cream is a tale of obsession much like David Gelb’s recent documentary Jiro Dreams of Sushi but while Jiro was a family orientated man, Ginger is the opposite.

Baker is a terrifying individual not only because of the intensity of his passion but because of his propensity to go off at the smallest thing. The film tries to separate people into two camps, those who admire the Ginger who has an unfaltering devotion to the drums and those who despise the man for the darker aspects of his life.

The film follows Ginger from his early career to his retirement as the film tries to show you a man of constant conflict. Beware of Mr Baker isn’t a pleasant film, the protagonist is at times completely reprehensible but it isn’t hard to be blown away by the sheer power he has behind a set of drums. The film travels all over the world as Ginger immerses himself in all the different sounds drums can make as director Jay Bulger emphasises the different sounds and movements in Ginger’s life. If anything,

Beware of Mr Baker is a professionally biased film but it does provide viewers with an unflattering look at the man many admire. It’s clever, well edited and provides a full picture of Ginger Baker, encouraging the viewer to make his own decision on what kind of a man he is but while it is an interesting exercise and quite fun to watch it lacks reason, the film never justifies why it exists except for the fact that Ginger Baker is just a little bit more interesting than the rest of us.

Ultimately its a film all about his music and in that regard Ginger is astounding as he manages to make everything he plays unique but as a film it doesn’t quite have the kind of conclusion or meaning most documentaries need.