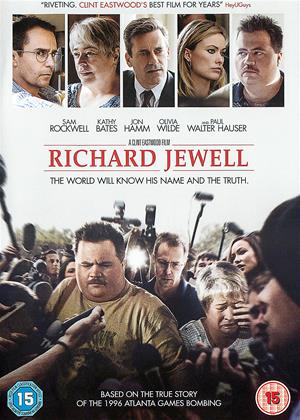 Richard Jewell is a simple man who is great at memorizing details and admirers the police force and authority. He is also portrayed as someone who wants to be honest and treat everyone with respect.

The cast are spot on. The truth is the victims included Richard who was scapegoated by lazy law enforcements and media outlets just looking for a front page article that the real culprit was still out carrying out the same crimes.

Some have criticised the handling of journalist Kathy. However reading some articles many people she worked with state the character is 99% spot on and the only thing that may have been off is her seducing for leads.

Clint Eastwood has become a bit hit or miss with some of his films recently but this is back on track.

Some will write off Clint Eastwood and his films due to his political beliefs. These are ignorant people who can't look beyond there own biases and appreciate a film for what it is. Go in with an open mind and just enjoy.

For anyone who likes factual films this is one not to miss. Well made in all respects, acting, cinematography, script etc. and interesting extra.

Loved this movie, Clint Eastwood directs at his best.

All the acting is first rate, and the story sucks you in and you end up rooting for Richard Jewell and his Lawyer, against the prejudiced FBI and media.

One of the best films of the year.

Ten out of ten plus - Richard Jewell review by BE

A truly excellent production with top acting from all of the cast.  A solid two hour watch. I cannot fault it.

What a nice change to see such a faultless screen presentation. Why hadn’t I heard of Paul Walter Hauser before?

I enjoyed this film, it was a simple story line but it holds your attention to the end. Clint Esatwood does not disappoint.

Like all of Clint Eastwood's directorial efforts this is a competently made film with a couple of outstanding performances but ultimately it's a by-the-numbers, underdone movie with some missed opportunities and at times a dose of silliness. Based on real events, although there's some very overt departures from them, this is the story of sad, nerdy security guard Richard Jewell (Paul Walter Hauser), a wannabe cop, who discovered a suspicious backpack at the 1996 Atlanta Summer Olympic park, herded the crowd away against the advice of the police he revered and saved lives when it exploded. Unfortunately for Richard the FBI focused their investigation on him as their chief suspect, leaked this to the media and he became the target of a trial-by-media campaign. Hauser as Richard is the best thing about the film infusing the character with sympathy, sadness and the right degree of idiocy to make the viewer as frustrated as his lawyer (Sam Rockwell). He is aided by Kathy Bates as his gentle, loving mother who fiercely defends her son. Rockwell is amusing here but is playing another angry, slightly comedic character who we never really get to know properly but its in Olivia Wilde's reporter Kathy Scruggs and John Hamm's FBI agent where the film goes awry. Scruggs (a real life person now deceased) is shown as a morally corrupt overly ambitious hack who seduces Hamm to get information, and Hamm is wooden and boring as the agent who obviously does no real investigation other than leak info, sleep around and harass Jewell. To this end the film is unconvincing. In here is an interesting, although thoroughly inaccurate account, of the huge danger of media trial but it's a routinely told story that lacks depth and focus.

Richard Jewell echoes most of Clint Eastwood’s more mildly pleasing takes on American hero figures. While still a showcasing of the aged director’s stern style and strong direction, it also harbors a tone of the ultra-conservative within him. He proudly appeared in many commercials as touting his tale on Jewel to be the truth as a massive jab about the media. But he also despises the FBI in this picture so it’s just a mixed bag of cynicism with this guy.

At the very least, I can state that Eastwood’s take on Jewel feels honest in never placing him too high up on that pedestal. Paul Walter Hauser, coming off of his perfectly pudgy dunce role in I Tonya, gives a fantastic performance as the innocent and dumbfounded Richard Jewell. He believes himself to be a proud security guard that can uphold the law. Even when confined to Centennial Park, he still thinks of himself as important as that of a beat cop. He makes very stupid mistakes and is exceptionally pompous about his placement that it wouldn’t be surprising if the inspiration for Paul Blart came directly from such a figure.

While it’s easy to laugh and mock such a guy who dabbles in candy bars and oversteps his boundaries, it also makes his story all the more compelling. In 1996, he finally has the big break he’s been waiting for; a security threat. There’s a mysterious backpack placed in Centennial Park. Jewell believes it’s a bomb. He has evidence that it is a bomb. He then struggles to save as many people as he can by evacuating the area but only clears enough people so that only two are killed and 100 are injured.

In the aftermath, the public deems him a hero while the FBI wants him to take the fall for the event. A profile is matched up with Jewell to stage him as a struggling white male trying to prove himself as more than the loser security guard. A media frenzy begins as the media starts reporting on a possible story of Richard Jewell being the mastermind behind the bombing incident. It’s ultimately a lack of evidence that leads to Jewell not being found guilty at a trial and in the evitable arrest of the true culprit.

The picture is a troubling one because while it paints the Jewell family with all their innocence and warts, it paints far more warts on those being sought to be vilified in such a story. This is pretty par for the course of biopics but mostly within the realm of Eastwood biopics in particular. One figure that comes off as exceptionally tarnished is Atlanta reporter Kathy Scruggs, showcased as being more of a sexual temptress in her reporting on digging up dirt about Jewell. Aside from merely showcasing a cartoonish vision of journalism, her hiring paper of the Atlanta-Journal Constitution has since denounced the film for its portrayal of their late reporter. While there’s a lot to go on to plump Jewell’s story with idiocy, there’s little to go on to believe that Scruggs was someone who grabbed her breasts when trying to stress her journalistic skills.

Richard Jewell simultaneously does what Eastwood does best and worst at in his stories about American heroes. There’s some fine acting we’ve come to expect from the talents he assembles in the roles of the protagonists but also a lot of that sneering at others he despises. At least within Richard Jewell that smugness about everyone who isn’t deemed a patriot is given a lessened directness amid its staging, unlike last year’s The Mule where Eastwood seems to play a sexist, racist, homophobic, and smartphone-hating codger that may or may not be a character, given how he ALWAYS plays this character in his own films. Jewell hides enough behind the story of the man rather than directly condemning that everyone who doesn’t share his views should get off his lawn.