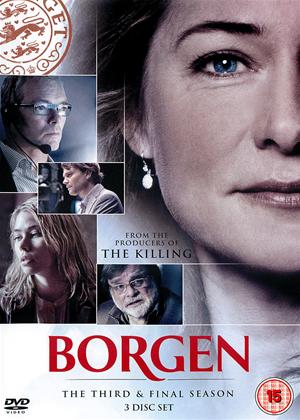 If any TV drama could endure a third series it is Borgen. It is very difficult to watch just one episode. So far I haven't managed. If you saw a bit recently on TV, I would strongly advise watching from the beginning of the series. To watch from the beginning of series 1 is not strictly necessary but all 3 series are so good, it might be an idea. There are at least 5 plots interwoven (hardly new but done much more elegantly than usual). These range from political infighting to matrimonial disharmony to career choices to television production to ill-health scares. A lot of Danish drama films have the same actors (like watching English 1950's comedy) but they are supremely good, so no complaints.

I wonder if politics really is as tactical as it is portrayed.

Very good, well worth watching, excellent acting - but this 3rd season is a little predictable - Borgen: Series 3 review by RP

It's in Danish, with subtitles, it's about the politics of a foreign country and it's lengthy with 10 x 1 hour episodes. Don't let that put you off as it's well worth watching if you've seen the earlier two seasons.

This time some 2½ years after the close of Season 2, Birgitte Nyborg the former Prime Minister (really well played by Sidse Babett Knudsen) is out of politics and travelling the world as a lecturer and businesswoman. She acquires an English man friend, decides to re-enter politics (of course), challenges for the leadership of the Moderate Party and fails (of course), then decides to set up her own party (of course). The series culminates in an election in which her new party (of course) holds a significant role.

As you might guess from my comments, I found it all quite predictable - but that said, the acting and the characterisation are so good that I really enjoyed it. Yes, there are the inevitable media spats, affairs, jockeying for position between member parties in a weak coalition government, not-very-exciting tales of a mole leaking party info etc etc. No real thrills, just good solid TV.

I'll give it 4/5 stars. Very good, well worth watching.

[Aside: the subtitles are a bit of a mixed bag, a mix of American and English with quite a few spelling mistakes. But that's a minor point]