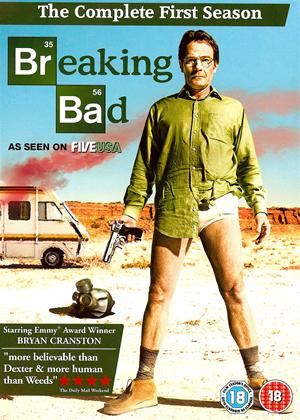 There are a number of US TV series that are so highly rated by their fans that it can seem a little over the top. I'm thinking in particular of 'The Wire', 'The Sopranos' and now 'Breaking Bad'. I missed them all on TV - and when I finally caught up with 'The Wire' and (fairly recently) 'The Sopranos' on disc they did indeed turn out to be excellent. So, is 'Breaking Bad' the same?

So far, yes. This is Season 1 so I'm sure there's much more plot and character development to come, but so far I'm impressed. This is a darkly funny, tense drama about a mild mannered man placed in a dreadful situation - and the bad choices he makes and the consequences of those bad decisions form the story line.

Walter White is a mild mannered high school chemistry teacher. Once a near-genius research chemist, he never capitalised on those skills but has coasted through life. He has a son disabled with cerebral palsy and his wife is expecting their second child. They are in financial trouble, he has a second job at a car wash of all places - and then comes the news that he has terminal lung cancer. So what does he do? Well it's obvious, isn't it: he teams up with a dropout drug dealer and starts to cook methamphetamine to bring in some desperately needed cash.

From that somewhat unrealistic premise and the first of many bad decisions the drama flows. It's tense in parts, the tension is relieved by moments of black comedy, then builds again as Walt begins to change. Is his personality growing? I guess I'll find out more when I watch Season 2.

My favourite TV series is probably the French cop/legal drama 'Spiral' but that doesn't have too many laughs, so I'll order up the next season of 'Breaking Bad' for a little more black humour as Walt stumbles on...

This American TV drama has achieved cult status. Psychology students throughout the UK have the chemistry symbols on their T-shirts. From the perspective of one who was naive to this I would recommend it as a well acted drama series. It is definitely a walk on the dark side. An impoverished Chemistry teacher is forced to take a job washing cars (including those of his arrogant pupils) to get out of debt. The lure of making lots of money by "cooking meth" becomes too great. So far so good. He then quickly becomes a serial killer and super hero, able even to front up to drug barons, he spends most nights away from home making high quality amphetamine, his wife tolerates this remarkably well. The credibility for me was lost after the car wash. We are supposed to believe that just because he has cancer he will become a sociopath. Nevertheless it is an original idea and goes into the genre of black, nay light-less, humour.

Strange and beguiling - Breaking Bad: Series 1 review by BE

Just started watching it under recommendation. It's a black comedy/drama and not what the Americans generally classify as just a 'drama'. Watched first episode which appeared okay, second episode a bit more attention holding, third episode - hooked! Gonna buy the box series.

However, having loved all series of The Wire, and enjoyed other US series like The Sopranos and to an extent, Dexter, I know how good USA TV drama van be when it's good - which is much MUCH better than most UK TV drama, which is soapy, boring, girly, aimed at a middle aged female audience to get easy meat ratings, and just not very sharply written or funny (if you don't believe me watch FAT FRIENDS and any Kay Mellor drivel).

Well, this series is superb (and I am only halfway through series 1 so have a lot of series to come!).

The first episode - the pilot - is not perfect. It's funny and dark AND believable. It starts with a bang and never lets up. No flab on this script - not a single ounce.

Bryan Cranston is a revelation as the oh-so-believable main character. Other characters are as sharply drawn too.

For me, this is a comedy - a pitch black comedy, yes, but a comedy none the less. Also a critique on US healthcare maybe.

Watching this series is a really satisfying experience - so glad a friend recommended this. 5 stars with bells on!

Must be me! - Breaking Bad: Series 1 review by HH

I just found this a depressing watch and cringed every time the seriously ill main character coughed. Sorry but I didn't see the humour at all, or found it funny to see an out of condition man in old-fashioned y-fronts - ugh! My husband enjoyed it though. I'm definitely in a minority here.