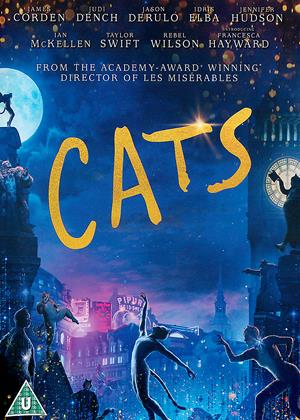 Can I give it zero? - Cats review by TH

Wow. Where to begin. I know this film was a major flop at the cinema and amongst the critics, but I was tempted to see if it was all that bad. I went in open minded and realised within half hour that this film was truly terrible. The songs seem to blend into one with only memories standing out. The storyline (was there one?) is thin at best and the cgi and acting from all involved was terrible.

Pushed to think of a positive other than Tom Hooper is allowed a misstep.

This film initially looked quite innovative but soon turned into something less amazing than it could have been, and that's really down to the computerized cats themselves I feel. To be honest I think that you could have achieved much better results by simply dressing the cast in updated fur cat suits than trying to turn them into cats with computers. Or alternatively give all the cast animated cat faces to go with the cat bodies. As it stands the characters in the main just look odd with the semi-human heads, and the scale of them looks odd too. If they were cats in a human world, given the size of the beds, it may have been a good idea to see the scale of the computerized cats if you had even seen just one glimpse of a full size person with them.

Additionally the film itself is really one for those who appreciate the dance, as you can expect it's non-stop dancing, and can get bit tedious to the average viewer.

I still think you can't beat the original 1980s version with the cat costumes and makeup, but maybe this version may appeal to the modern youngster. To me it's a bit like comparing the original 1970s charlie and the chocolate factory and it's modern version, it may not be as slick as the remake but it's more enjoyable.

So this CATS update wasn't as great as it could have been really.

Don’t waste your time the story is hard to follow and is just awful. The start is all over the place all it needed was a little narrative but there is none

I had never seen this musical or heard any of the songs apart from the classic hit ‘Memories’ before, so didn’t really know what to expect. However within the first five minutes, both myself and my friends, were asking what is this and why is the music so awful? Musically this seems to be stuck in the 70’s and lyrically it is really simplistic, desperately throwing words in to create rhyme, but ending up with nonsensical songs about nothing! A few big names have been included such as Idris Elba, Judi Dench and Ian McKellen, but they are really here to help sell, rather than for any practical reason, as they are really badly miscast and desperately try to sing when they can’t! There really is no excuse for having virtually an entire cast who cannot sing in a musical and actors who look like they’ve made a big mistake appearing in this, doesn’t help either! This comes across as really a ballet for people who think they are being intellectual, when it isn’t, or so simplistic that it’s really aimed at children, I couldn’t decide which? I cold not really tell you what the story is because there isn’t one, or again it’s so simplistic, something about wanting to go to Cat Heaven and be re-born again, so it also has very heavy religious undertones! There is one actor who can sing, a lady called Jennifer Hudson, who plays the part of outcast ‘Grizabella’, she’s not in it for long and only sings one song, ‘Memories’ in broken up parts at various points throughout. However James Cordon does also give a good performance, as Buster Jones the Brummell cat, when he sings a rousing melody typical of 70’s Disney musicals, straight out of Mary Poppins or Bedknobs & Broomsticks! This film comes across as trying too hard to be something it isn’t, thinks it’s very clever, but really just falls flat right from the beginning. For me it just came across as a very pale imitation of a 60’s or 70’s Disney Musical, perhaps it would have been better animated, but as it is, it’s just not a very good film at all and the songs are really naff!

There are few movies that truly break my brain and I find myself unable to fully comprehend the screen. Cats is that mind-bending bizarre film that becomes such a fever dream there’s a breaking point for the audience. Around the time that Ian McKellen started lapping milk from a saucer and hissing, something broke. We could all feel it. Our minds were slipping away. In this scenario, there are only two options. You either squirm in your seat for the awful surrealness of such a picture or you embrace its madness and trashy nature. Being someone who always tries to go to the movies to have a good time, I favored the side of pleasing. A trashy thrill brewed from a mixture of insanity and guilty pleasure but I just can’t be mad about a film this strange.

Based on the popular musical, Cats never slows down to fully explain what is going on. The best I could gather from such a chaotic first act is that the central characters are cats living on the street. They must dance and sing for the chance to be chosen as a cat that will essentially die and go onto a better life. Yes, this is seriously the plot. And so the cats sing and dance about everything. Do not expect the cats to slow down and explain themselves if there isn’t a song happening. The newest cat of Victoria will not help you; she can only do so much as an audience surrogate to this madness.

What follows is a slew of strange scenes with wall-to-wall music, never placing a cohesiveness to any of its strangeness and wonder. Judi Dench, dressed in a fur coat and whiskers, plays the elder cat who ultimately makes the call for the cat who will ascend to the heavens. Idris Elba, dressed in street hustler attire, is the evil wizard cat that hopes to kidnap all the performing cats so that he will win the contest of reincarnation by default. And then there’s Jennifer Hudson as the poor soul of a cat with a beautiful voice and snot all over her face. Rebel Wilson and James Corden basically appear in the picture in hopes of one-upping the other in how many tubby and clumsy antics they can get into with this visual effects feast. And Taylor Swift is there.

As if it needed to be said, everything in this film is strange and I don’t just mean the off-putting special effects of turning human beings into anthropomorphized cats. The music is severely dated, bouncing around so many different styles that include the likes of creepy 80s synth, vibrant rap, overdone opera, and dusty broadway numbers. The very staging, one that seems to fluctuate between a believable large world for these cats and stage production, boggles the mind at the visual choices which seem to be for little more than confusing glimmering. Any attempt to fully understand why cats wear coats or how Taylor Swift keeps catnip in a bedazzled tin or how Rebel Wilson can shed her skin for a sparkling musical outfit will be met with no answers. Your brain will only melt.

Because of such insanity, as well as visual effects that were never fully finished by the time I got to the screener, a lot of critics have savaged the film as not just one of the worst films of 2019 but the decade as a whole. Hyperbolic, perhaps, but this all depends on how willing you are to embrace the trashy thrill of it all. This is an overly ambitious picture that falls flat on its face but for even attempting to take that big step out and landing with a floor-cracking thud, I must admit I was amused. I will never forget as crazy a picture as Cats, a film that may or may not be destined for cult midnight showings for sing-alongs. I appreciate that a film such as this, misguided in nearly every aspect, had the audacity to chuck my brain in a microwave and set it to crazy.