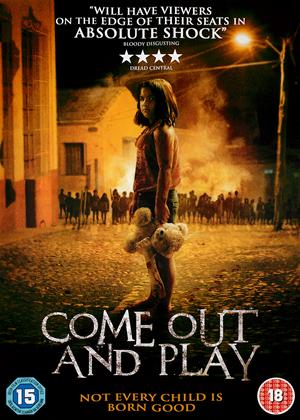 Synopsis:
A young couple expecting their first child travel to Mexico for an idyllic romantic getaway. They dock on a sun-kissed beach where children run around playing and giggling and it seems to be the perfect holiday - yet as they wander the strangely empty streets, a sense of unease sets in: their hotel lies abandoned, whilst a distress signal eerily echoes from a nearby radio. Children's laughter drifts through the streets, with no adults in sight. When the couple witness the violent death of an old man at the hands of children, their day in paradise becomes a nightmare struggle for survival.
Actors:
Ebon Moss-Bachrach, Vinessa Shaw, Daniel Giménez Cacho, Gerardo Taracena, Alejandro Álvarez
Directors:
Makinov
Producers:
Makinov
Writers:
Makinov, Juan José Plans
Aka:
Juego de niños
Studio:
Metrodome
Genres:
Horror, Thrillers
Countries:
Mexico, Horror, Thrillers

Sign up
House at the End of the Street

Reviews of Come Out and Play

Based on a little known Spanish horror movie from the mid 1970’s Come out and Play is the debut film from a bizarre and outspoken director who is only ever seen in public wearing a red, bloodied mask and goes only by the name Makinov.

The film is a fairly standard horror movie about couple, Beth and Francisco, who venture to a remote island as part of their last intimate vacation before their first child is born. Beth, heavily pregnant, and Francisco arrive on a beautiful island off the coast of Mexico and initially contribute the absence of any adults to the aftermath of a particularly raucous festival, when however Francisco witnesses the brutal murder of a fisherman, things on the island do not seem quite so peaceful.

For a man who boasts a wild and untamable personality Come out and Play is relatively placid; the violence only really occurs intermittently and although some of the Ariel shots and hand held camera is a little unusual, visually the film is also not especially expressive. In many ways the film relies on the typical tropes of the demon-child vein of the genre, with much of the horror relying on slowly pent up tension and children who may initially appear sweet and welcoming become distant and dangerous as the narrative progresses.

The finale is a welcome surprise to what is otherwise a reasonable yet unremarkable movie that is bound to entertain horror fanatics but is unlikely to gain the notoriety Makinov was hoping for.