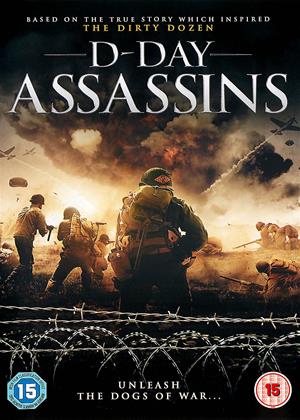 Synopsis:
In 1944, a group of American soldier known as "The Filthy Thirteen" are becoming an increasing problem for their superiors - disobeying orders, bathing infrequently and often going AWOL from their barracks. But the rebellious men are given an opportunity to atone for their behaviour when they are selected to be the first unit to parachute behind German lines during the invasion of Normandy. Their goal is to move through enemy territory on foot and destroy Nazi supply lines and escape routes. Some call it a suicide mission. But they haven't counted on the ferocity and determination of this ragtag group of D-Day Assassins who will stop at nothing to take down the enemy.
Actors:
Lee Bane, Erick Hayden, Ciaron Davies, Derek Nelson, Mark Homer, Vicki Glover, Patrick O'Donnell, Paris Stangl, Angelique Joan, Tom Ward-Thomas, Dennis Farrin, Aaron Jeffcoate, Dominic Gladwin, Jason Homewood, Brendan Purcell II, Louise Rhian Poole, Ed Allenby, Ryan Michaels, Linny Bushey, Edwina Lea
Directors:
Andrew Jones
Producers:
Rebecca Graham, Robert Graham, Andrew Jones, Harry Willis, Jonathan Willis, Tom Willis
Writers:
Andrew Jones, Sharron Jones
Aka:
The Filthy Thirteen
Studio:
4digital
Genres:
British Films, Action & Adventure, Drama
Countries:
UK

Interesting film, nothing special about it, covers an area of WW2 that has been well covered before in films, but is still watchable!

Prolific director Andrew Jones has made a name for himself delivering minimally-budgeted projects for over ten years now, and with some success. Usually focusing on horror themes, he eschews spectacular scenarios in favour of telling more intimate character-based tales with a small collection of actors (although here, the cast list is a lot longer than is usual). With these war-based projects, he often chooses to tell stories of American soldiers, using English actors and locations. A recent example of this is 2018's 'Alcatraz' (which employs some of the actors featured here). So although his budget doesn't allow for big action adventures, Jones's ambitions are fairly broad. Whether the results mark this as a good thing or not is up to the individual - for me, it is a mixed bag.

With horror stories, it is easier to overlook slowly-delivered, perfunctory dialogue; this approach, together with occasionally challenging sound-design, can actually enhance the dream-like quality of what you are watching - Jones's series of 'Robert the Doll' films often work because of this. For a reality-based story such as 'D-Day Assassins', such restrictions are more glaring.

With his customary loose approximation of accuracy, 'The Filthy Thirteen' are shown in flashback, as gruff old veteran and survivor Hawkeye (Ryan Michaels) - so gruff in fact, he is sometimes difficult to understand - recounts to a directionless young man (Aaron Jeffcoate) stories of his war-torn youth. This makes up the bulk of the 77 minutes running time. All of this is handsomely filmed, making good use of the location, if rarely evoking the 'feel' of those days (everything is a little too bright for that). Viewers who are knowledgeable about weaponry and clothes used at the time might get a little irritated. For me, such things are not really a huge problem, as long as the story is arresting, which it is for the most part. Even then, although 'D-Day Assassins' is character-based, we never learn much about any of them, other than the struggles they are facing at the given time. My score for this is 6 out of 10.

(For anyone worried about the lack of regular Lee Bane - he's here, but you have to wait to see him, as the vicar and I believe the unseen lawyer right at the end.)