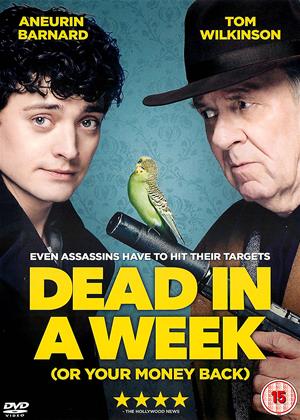 Rent other films like Dead in a Week: Or Your Money Back

Reviews (4) of Dead in a Week: Or Your Money Back

Tom has a good time. - Dead in a Week: Or Your Money Back review by NC

Have to give it 4 as there is just so much junk about, and is pleasant change to see some acting at last, and a simple film, with small budget, showing can still have a fun film.

Tom is understated, as always, but, like Geoffrey Rush, just cruises through with perfect timing.

Very old-fashioned Brit-flick based on an OLD overused idea - Dead in a Week: Or Your Money Back review by PV

I see from the credits that this is based on an 'original idea' by the director/writer and producer. Well, now. In no way, shape or form is the idea of someone who hires an assassin to kill him, then changes his mind and is in a fix, is 'original'. I have seen and heard half a dozen such stories - from Bulworth with Warren Beatty to various others. And as for failed attempted at suicide - well A MAN CALLED OVE does that as does the Jim Broadbent film whose name I cannot remember.

Anyway, this comedy is passable, if very predictable, though oddly feels too long despite an 80 minute run time, The final act flags badly - and the relationship story is weak and not very credible. Cartoon character comedy really.

The old assassin and his wife are massive stereotypes - no-one lives like that any more, not even 70 year olds!

But it's fun in parts, as a cartoony drama - so if you don;t expect too much, it passes the time.

And some class acting talent here. So 3 stars - just - as some decent music here.

It says Stephen Fry produced it too (THE SF? Who knows?)

Pleasant afternoon film.... - Dead in a Week: Or Your Money Back review by LB

Nice idea, and well acted film. Some parts were over-long and a little boring but all in all a perfectly pleasant 90 minutes or so.

Well acted. Afternoon movie. - Dead in a Week: Or Your Money Back review by LW

This film has a lovely gentle humour that balances well against the macabre plot. Tom Wilkinson and Aneurin Barnard play their parts beautifully and the whole thing bowls along quite nicely. Much kudos to the Director for making a very good film.