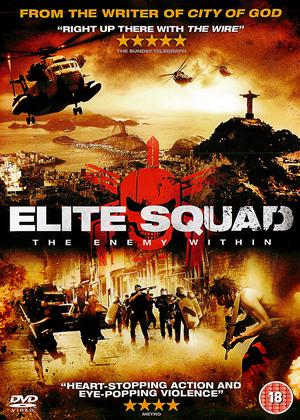 Rent other films like Elite Squad: The Enemy Within

Favorite Films From the 2010s
18 films by cinemadiso

Reviews (1) of Elite Squad: The Enemy Within

Better than the first 'Elite Squad' film. Recommended. - Elite Squad: The Enemy Within review by RP

This is good stuff, if you like that kind of thing: it's in Portuguese, with subtitles, and again told in a semi-documentary style, with two of the major characters from the first film. I liked it better than the first film, perhaps because the story is more complex rather than simply a series of shoot-outs and BOPE boot camp sequences...

Set 13 years after the events of the first film, after a bloody prison riot Nascimento falls from favour and is booted upstairs to a political role, where he is able to promote BOPE to a powerful military police force. With the reduction in income from drug dealers, the corruption in the regular police changes into protection racketeering and involves local politicians - and the film is based on the conflict between corrupt police, corrupt politicians, and the incorruptible Nascimento.

Despite its success, I only rated the first Elite Squad film 3/5 stars. I'll give this one 4/5 stars. Recommended.

‘Elite Squad 2’ (Tropa de Elite 2) is the follow-up to 2007’s hit ‘Elite Squad’, winner of the Golden Bear at the prestigious Berlin Film Festival. In ‘Elite Squad 2’, 10 years has passed but still on the case is Roberto Nascimento (Wagner Moura), leader of Rio de Janeiro’s special military police unit BOPE (Batalhão de Operações Policiais Especiais). In it, Nascimento patrols Brazil’s favelas and slums, on a mission to put an end to drug trafficking. Trouble is not only are criminals running the drug trade – Nascimento discovers that corrupt politicians and dirty cops are willing and able participants, too.

‘Elite Squad 2’ is the the all-time box-office and highest-grossing film in Brazil, even beating James Cameron’s 3-D behemoth ‘Avatar’! This is no small feat from a locally-produced film, and it has the right to that title since ‘Elite Squad 2’ has tight storytelling, compelling characters, and riveting action sequences; particularly, its chase sequences in and out of the favelas make for great film making. The chase sequences alone makes it a one-of-a-kind thriller.

In the vein of ‘The Godfather’ and ‘The Departed’ (sure, throw in TV’s ‘The Wire’), ‘Elite Squad 2’ is directed by José Padilha (‘Bus 174’), an ingénue when it comes to crime thrillers. More than an action movie, ‘Elite Squad 2’ has more depth than what usually Hollywood offers. There is a premium on plot here and you always have to be on your toes because it’s unapologetic when it comes to reeling you in. The drama works too; this time drawing from real-life scandals in Brazil involving public figures and criminals alike.

Wagner Moura as the lead intelligence officer has the tough cop down pat but also showcases nuanced tenderness especially with his relationship with his teenage son. You get a sense that even if he subscribes to duty before everything else – all police business – he has a personal stake in the matter. After all, it’sRio de Janeiro, their homestead and if Moura’s Nascimento makes good for the community, ditto for his son. ‘Elite Squad 2’ is definitely a must-see.