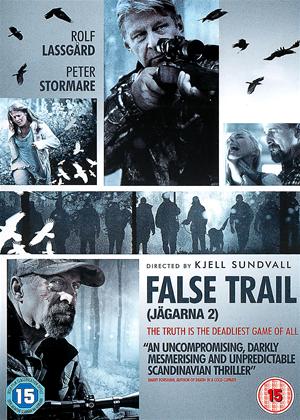 Peter Stomare (Fargo) was standout as the increasingly controlling local policeman, and the story had enough twists to keep you on your toes, although at 2'05" we were all getting a bit tense towards the end.

Having become a bit addicted to the atmosphere and tone of Scando murder-mystery, it is good to see things at film pace (just about) rather than as a series, and to get sucked into some pretty sharply drawn characters and disturbing scenes and ideas.

The Nemesis of Nordic Noir - False Trail review by Wkarmo

The vile personality of one of the central characters is so well acted it will haunt you for days. The plot slowly unpeels the motivations and relationships of his character to show a repulsive centre. As the plot progresses he has to continue his path of evil until it can go no more. I cannot say much more without plot spoiling but it is utterly engrossing and shows the unpleasant side of human behaviour and its consequences. Great plot, great acting but should probably be an 18 rated for gore and general nastiness.

Following on from the small but successful Nordic mystery Jaagarna made in the late 90’s director Kjell Sundvall catches up with Erik Backstrom, a Swedish detective, who this time finds himself investigating the disappearance of a young woman in the local, heavily wooded area of Sweden.

The film begins with a dark and intriguing sequence in which a number of hunters prepare to enter the beautiful Swedish woods, cut through with shots of a bloodied and terrified woman, running through these same woods, in fear of her life. Our interest immediately peaked False Trail then unfolds a visually beautiful mystery thriller with police procedural overtones.

The extremity of the darkness hinted at the opening sequence ultimately fails to deliver, the plot turning into a typical murder mystery, yet the impressive acting and the background imagery of the logging trade, with felled trees and the seemingly constant trafficking of large masses of dead wood, help to make what ought to be a somewhat mundane movie into a tense and intense thriller.

Those who have become disillusioned with the acting abilities of Peter Stormare, following his appearance in such Hollywood duds as this year’s The Last Stand and his appearance as dull and predictable bad guys in American TV shows such as NCIS and Body of Proof will find themselves pleasantly surprised by his performance in native language where he truly shines, thanks largely to the depth of his character’s background story and motivation.