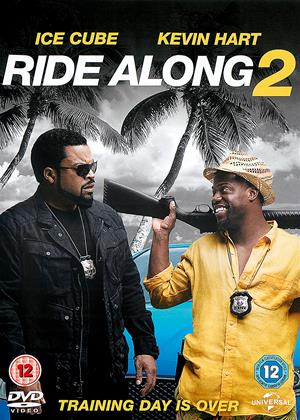 More of the same format as 1. Think Ice Cube could handle a way better part/film. Not as good as Bad Boys by miles.

I give Kevin Hart too much credit. I want him to be the comedic talent that warrants his myriad of buddy pictures. But when he starts starring in sequels to his lackluster buddy comedies, it’s clear that he’s either struggling or just doesn’t care about progressing in his career. The first Ride Along movie was a success in box office only, banking on the pairing of Ice Cube and Kevin Hart. Ride Along 2 strives to be nothing more than another easy repeat of that success. It doesn’t strive past its predictable formula of the serious and goofy cop. Why would it? Why bother risking all that money in the fertile time of January films to actually make a decent comedy?

The plot is a bore of cop comedy. An evil crime lord by the name of Antonio Pope (Benjamin Bratt) is selling drugs, corrupting officials, hacking into systems, etc. You know, the usual bad guy antics. He doesn’t exactly have anything interesting to say or do outside of giving Cube and Hart something to do. Bratt must not have gotten the memo that this is supposed to be a comedy the way he plays the role too straight and bland. The cold opening features his character ordering the brutal murder of a man that he delights in watching from afar. If it weren’t for the inclusion Ken Jeong as the dorky hacker to that scene, you’d swear you were watching a more serious action picture. But then the babbling of Hart’s Ben and the sneering of Cube’s James let us know that this is supposed to be a comedy.

There’s a tiring nature in how the actors and the script struggle for laughs at every turn. When a suspect flees from a scene, Kevin Hart shouts to his partner that it’s a foot chase. Ice Cube sneers and states that you don’t have to say it’s a foot chase when there’s a foot chase. It’s also not that funny to point out not to say a foot chase when a foot chase occurs. When Kevin Hart and Ken Jeong find themselves combining forces to take down Antonio, their pre-game chat involves them discussing the best Star Wars movie. The second the dialogue begins, I have already set my watch to what will happen: one will say The Empire Strikes Back, the other will say Return of the Jedi and an argument about Ewoks will break out. Sure enough, it was right on schedule with no unexpected laughs or cleverness to the dialogue.

The rest of movie plays out just as predictably. There’s a double cross here, a car chase there and handful of gunfights with a big explosion to cap it all off. The subplot of Ben’s wedding does nothing and the addition of Olivia Munn as the female muscle adds very little if anything. Everything just proceeds accordingly as per cliche buddy cop formula. Even Hart and Cube seem rather passive in these roles of lame writing that should be damned to satire by now. The only surprising moment in any of this is when Kevin Hart becomes a fantastic driver thanks to his Grand Theft Auto video game experience. His vision shifts to that of a video game, envisioning everything from the cars to Ice Cube as cheaply rendered video game graphics. What could have been a decently humorous concept is ruined by the lackluster rendering of video games. The fact that it looks as ugly as it does is yet another piece of evidence that the filmmakers just don’t care.

The best I can say about Ride Along 2 is that it never offended and was mercifully under two hours. It’s as simple as you’d expect, fulfilling the bare minimum of buddy cop comedies. Predicting the outcome so early on allows the viewer to think about the rest of the day: what you’ll have for dinner, if your car needs gas and what movie you’ll watch later to forget about this one.