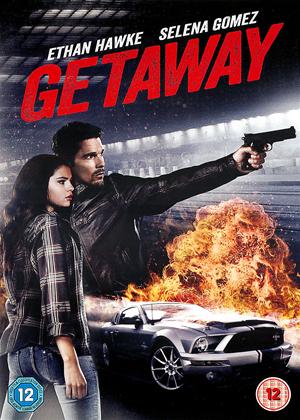 Ethan Hawke seems to appreciate the quality of small budget filmmaking as he continues to star in smaller under the radar pictures such as Getaway, a surprisingly slick yet unbelievable tale of a man called Brent (Hawke) trying to save his wife from an unnamed enemy (Jon Voight) and how the interference of a young woman (Selena Gomez) complicates his plans.

The film, despite its decreased budget is understandably chaotic as most of the films action takes place within the confines of a custom sports car as Brent is forced to evade police and carry out a series of insane jobs. The film gets increasingly inventive when it comes to ways to destroy and mangle cars and other equally playable items. The film feels like it prides itself on being as over the top as possible.

Hawke however finds himself stuck in a loveless role as most of his dialogue revolves around his kidnapped wife giving the audience little reason to really care about him as he continues to endanger people all over this badly policed city. Gomez however keeps the story going and even makes for an unconventional heroine, a capable but naive rich kid.

Voight, although rarely seen brings plenty of menace to the party as the venomous and hypocritical voice behind the many cameras the car is installed with. Overall the film just flies by in a blur of crushed metal and plot twists with little care given to the concept of collateral damage.

Much like recent films in the Fast & Furious franchise, Getaway teases more than delves into its characters feelings making the film rather empty as a drama but anyone on hand solely for the destruction Getaway puts the action front and centre and shows off while doing so.

While the film plots a pretty expected path director Courtney Solomon plays to the films strengths and sweeps the weaknesses as far under the rug as possible in this race against the clock whirlwind picture.