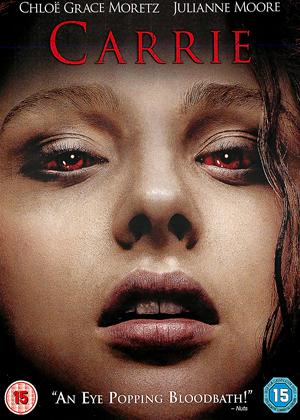 This modern day retelling of the classic 1970s version is a tale of emotional manipulation, the problems with self control and the destruction of a soul. The original crafted its story as a tale about good and evil and how easily those two can intertwine. Time has changed this tale as Carrie is less satanic and more relatable.

The film follows Carrie White (Chloe Moretz), a deeply shy young girl who is sheltered from normality by her deeply religious mother Margaret (Julianne Moore) and faces the brunt of her schools animosity because of it. However when something happens Carrie begins to manifest powers that can only mean bad things for those who chose to change and control Carrie.

Moretz is excellent as always as the titular girl as she makes it easy to empathise with her, even when things get really out of control she still manages to keep viewers on her side. Moore on the other hand is the ultimate crazy, a religious hardliner whose tragic past consumes her thoughts, her connection to god and how she interacts with the real world. She turns Margaret into a zealot as she attempts to control her past mistakes through the one that she let live, Carrie.

The mean girls that consume most of the films runtime are mindless faces, eclipsed by Moretz but Judy Greer makes an impact as one of the few teachers on her side, a mix of good and bad, patience and hatred. The film has an excellent grasp of the shades of grey seeping into the pores of Carrie and the people around her.

In the end Carrie is an interesting horror film that understands the many things that have changed to our world since the original. The use of technology and the improved CGI make Carrie’s much anticipated finale a deadly one but the whole thing ends on a flat note as people still never quite seem to comprehend the severity of the films events, instead shrugging them off. Carrie never really leaves her mark despite the power and destruction those around her bring out