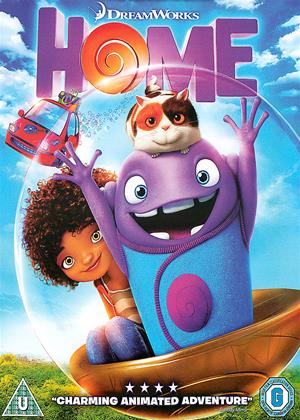 Dreamworks usually puts a lot into their animated features, doing their best to push boundaries of the medium and give Pixar some real competition. That is not the case with Home. Previously, the studio gave a variety of brilliantly designed dragons (How to Train Your Dragon 2) and slick looking talking animals (Penguins of Madagascar). What do they have to offer in Home? Little purple aliens with gummy-like structures that all look the same. Needless to say, this is not one of their best efforts as of late.

The film entertains the premise that a colony of inept squat aliens known as the Boov take over Earth, despite being too simple minded to defeat their following enemies or conquer worlds of evil robots. When they arrive on Earth, they round up all the humans with vacuum ships and relocate them all to Australia (I’ll bet Australia just loves having that much company). The rest of Earth is then reserved for the Boov to claim as their own. I swear this must be some version of Earth where humans destroyed all their weapons since we never see any military attempt to subdue the galactic invaders. Do the Boov even have weapons? They don’t seem to be that threatening at all. Perhaps they’re seen as too cute to kill as that’s the only reason I could fathom humanity just rolling over for these pint-sized visitors.

The Boov are cute, maybe, but monotonously designed. Practically every Boov looks identical to the other with only minor differences like mustaches. Seen as the most annoying and absent-minded goof of the pack is Oh (Jim Parsons), a one-joke name based on how everyone groans while in his presence. He desperately wants to make friends, but nobody appreciates his almost creepy level of attention grabbing. Having accidentally signaled the end for his people and Earth, Oh becomes a fugitive on the lam. He forms a companionship with the only non-captured human, preteen Tip (Rihanna). The two wanted individuals strike a deal to work with each other: Tip wants to find her mom and Oh wants to escape to Antarctica. It would seem like a higher priority would be to free Earth or stop the deadly army that Oh knows is coming to destroy them, but that would get in the way of the required hijinks. They'll figure that part out later after all the dancing and silliness.

Despite its original premise, Home plays too close to the stereotypical requirements of a bouncy animated film. You have your gross kid jokes where Oh consumes a urinal puck along with other bathroom contents (“Do not drink the lemonade!). You have the manic moments of mayhem in which Tip and Oh end up dashing around the monuments of Paris. You have the sappy moments of family and friendship complete with a forced heartfelt soundtrack by Rihanna and Jennifer Lopez. And, naturally, the film has to end with all the characters dancing. All the beats are there, but that’s all that feels present. There’s not much of any chemistry between Tip and Oh as they feel more like standard archetypes than unique characters. It would help if there were some real tension and conflict to this whole invasion plot, but everything is kept far too safe and sweet. So standard was every aspect of this script I thought it was a parody of the animated movie formula.

Home is at least colorful to look at. The single most unique trait about the Boov is that they act as living mood rings, changing their color for every emotion. And the movie is innocent enough for younger viewers without the presence of much violence or dark storytelling. It will even keep up with the attention span of kids, throwing enough jokes at the screen at a fantastic rate to keep up with even the ADD of little watchers. But that’s precisely the problem - adult viewers will never get a moment to breathe with all the hyper animated movie moments bombarding the brain. We don’t get to know these characters or their world much at all. By the time the film arrives at a slow moment for an emotional tug at the heartstrings, it’s a dull pluck that demands quite a bit from the audience to feel anything from one-dimensional characters. It’s not that these animated films high on energy and low on character can’t be fun as was the case with Robots and The Book of Life. But those films actually had some wit and smarts to the characters, their world and the gags. In comparison, Home is empty with ideas.

Everything about Home feels like an artificial animated film assembled by committee. It fulfills all the necessary checklist items including small marketable creatures, music to dance with and a plethora of gags that won’t go over the heads of kids. But movies shouldn’t settle for just meeting the bare minimum. Nor should families settle for something so sugary simple, despite its positive message. Younger kids may get a mild kick out of the bright colors and cheerful spirit, but the older kids will be smart enough to grow frustrated asking why the humans don’t just rise up against the Boov. Those were certainly my thoughts throughout as the more time I spend with the overly jokey and redundant aliens, the more I wanted them to explode into globs of Jello. And those are not the kinds of thoughts I want to have for such an innocent animated feature built for the wee ones.