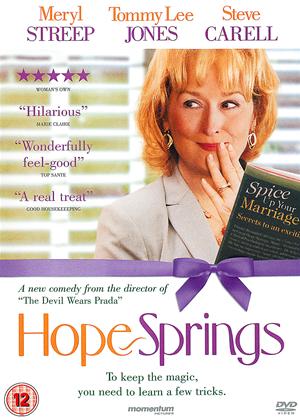 Synopsis:
Kay (Meryl Streep) and Arnold (Tommy Lee Jones) are a devoted couple, but decades of marriage have left Kay wanting to spice things up and reconnect with her husband. When she hears of a renowned couples specialist (Steve Corell) in the small town of Great Hope Springs, she attempts to persuade her sceptical husband, a steadfast man of routine, to get on a plane for a week of marriage therapy. Just convincing the stubborn Arnold to go on the retreat is hard enough. The real challenge for both of them comes as they shed their hang-ups and try to re-ignite the spark that caused them to fall for each other in the first place.
Actors:
Meryl Streep, Tommy Lee Jones, Steve Carell, Jean Smart, Ben Rappaport, Marin Ireland, Patch Darragh, Brett Rice, Becky Ann Baker, Elisabeth Shue, Charles Techman, Danny Flaherty, Damian Young, Mimi Rogers, Ann Harada, Jack Haley, Susan Misner, Rony Clanton, John Srednicki, Madeline Ruskin
Directors:
David Frankel
Producers:
Todd Black, Guymon Casady
Writers:
Vanessa Taylor
Studio:
Momentum Pictures
Genres:
Comedy, Romance

The key characters are played well enough, with Kay (Meryl Streep) and Arnold (Tommy Lee Jones) looking great, Steve Carell doing fine as the sex therapist visited by a couple who have grown into a hum-drum relationship - by Kay's standards at least.

However, I couldn't help but cringe - not at the post middle aged sexual yearnings, I'm all for reminding the young that older folk like a bit of rumpy-pumpy -but at the lazy stereotypical assumptions on which the relationship is based. This couple were like chalk and cheese, at the start anyway, so to suggest a good time in the sack would solve all their issues was really stretching things for me. In fact, Arnold apparently had a personality transplant somewhere in the film as he retained nothing of his original character.

Not impressed but if you are happy just to watch Meryl and Tommy Lee, you'll get something out of it - which, irritatingly, is probably what the producers are (quite literally) banking on!

What a wonderful entertainment this film is. - Hope Springs review by DW

***The end is NOT the end! Keep watching whilst the closing credits roll by: you will see a mini-sequel.***

Terrific restrained performances from Meryl Streep & Tommy Lee Jones: we're used to seeing these two going at it full throttle to portray the extremes of their characterisations but both actors have dialled it right down to create this fine film. Their superlative acting was a fitting response to a non-formulaic story line. (I was greatly amused by the corgi dog woman: see if you agree with me)!

With opening scenes that set up the stagnant state of their more than thirty year marriage, with a husband who escapes the stresses of work through golf and a wife whose romantic and emotional needs have gone so long unchecked that they have all but dried up; Kay and Arnold sleep in separate rooms, barely speak let alone really communicate and appear to be living almost entirely separate lives. Yet this oft covered stereotype is played with dignity and a sense of honesty that the depiction usually lacks.

In the starring roles Streep and Jones play their parts with a combination of desperate agitation and gruff acceptance that at first cause you to believe they are doomed to repeat old habits and never dislodge themselves from this rut. However the probing, in-depth and surprisingly emotional therapy given to them by none other than Steve Carell shakes the couple so much that at times it seems almost groundbreaking.

In a world with ever-extending life span’s and ever-increasing divorce rates Hope Springs is a surprisingly accurate and evocative depiction of the trials of long term marriage; it’s intense subject matter broken by a light but effective smattering of comedy and a particularly effective casting choice in Carell. A film well worth watching by those at a certain point in life, that may raise questions of their own relationships and behaviour and if nothing else, is sure to be considerably cheaper than actual therapy sessions.