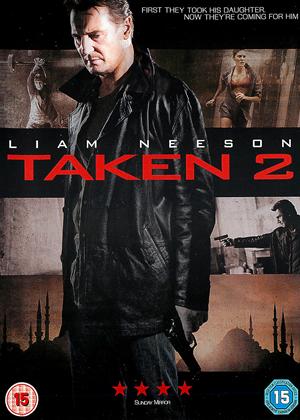 Four years after rescuing his 17 year old daughter Kim (Maggie Grace) from Albanian kidnappers who intended to sell her into prostitution, retired CIA agent Brian Mills (Liam Neeson) and his wife Lenore (Famke Janssen) are kidnapped whilst visiting Istanbul on a family holiday. Their kidnapper, the father of one of the kidnappers killed by Mills in Paris four years earlier, has sworn to take revenge for the death of his son, but does not count on Kim’s own resolute desire to save her father, just as he saved her.

Sticking with the tried and true formula that made the first Taken movie a success the sequel begins almost immediately after the end of its predecessor; mirroring in many ways the script, story and action of the 2008 original the movie is ultimately an attempt to cash in on the success of the first.

Yet even fans of this sort of contrite and predictable action are likely to feel that Taken 2 is lacking in substance and depth, which is unfortunate as the movie’s premise does in fact have something to offer. Like a literal mirror reflection of its predecessor Taken 2 had the opportunity to explore the reversal of roles on offer: as with a reflection, right becomes left and the daughter becomes the hero the father the one in peril. Unfortunately, and rather unsurprisingly if I’m totally honest, the movie bypasses all of this potential and instead opts for guns. Lots and lots of guns.

If that doesn’t sell it for you then there’s not a great deal else I can say, Neeson does what he himself says he does best, punches, kicks and shoots people. The villains are suitably foreign and villainous for a Hollywood movie and his wife and daughter provide the good looks. Throw in some fires and explosions (did I mention the guns?) and you have all the material for almost any so-called action-thriller around; Taken 2 ticks just enough boxes to be a somewhat mediocre sequel whose success over smaller and more intriguing movies is utterly baffling.