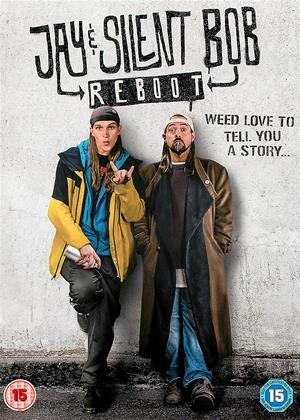 Synopsis:
When Jay (Jason Mewes) and Silent Bob (Kevin Smith) discover that a reboot of the Bluntman and Chronic movie is being made, they head off to ChronicCon in Hollywood to stop it. Along the way, they run into Jay's old girlfriend Justice (Shannon Elizabeth) and Jay discovers he has a daughter he never knew he had - one who forces Jay and Silent Bob at knife-point to take her and her 3 friends with them to Hollywood so they can be extras in the new movie. Filled to the brim with cameo appearances from a myriad of past characters from the View Askewniverse, as well as some new, but very familiar, faces.
Actors:
Joey Lauren Adams, Ben Affleck, Diedrich Bader, Johnny 'Bananas' Devenanzio, Melissa Benoist, Marc Bernardin, Jason Biggs, Aparna Brielle, Jeff Chase, Ming Chen, Walter Flanagan, Bryan Johnson, Mike Zapcic, Marilyn Ghigliotti, Ernest O'Donnell, Brian O'Halloran, Scott Schiaffo, John Willyung, Keith Coogan, Chelsey Cole
Directors:
Kevin Smith
Producers:
Liz Destro, Jordan Monsanto
Voiced By:
Chelsea Gilson, Billy Slaughter
Writers:
Kevin Smith
Studio:
Universal Pictures
Genres:
Comedy

Rent other films like Jay and Silent Bob Reboot

As every icon is dug up from its tomb, so continues Kevin Smith riding the most iconic duo of his many comedies. Jay and Silent Bob were sided character stoners within Clerk, played by Jason Mewes and Kevin Smith more out of necessity. They would reprise their roles in multiple Smith comedies until receiving their own film, Jay and Silent Bob Strike Back. Their grand return in The Jay and Silent Bob Reboot isn’t really a reboot but a sequel to that film, continuing the story and the character in the softly nostalgic picture. Even though the young punks have been around for over twenty years, they still act like the rebellious stoners they once were, entering into the Cheech & Chong era of aged reprisal.

The film offers little development past a few expected cliches of this type of picture. Once more, Jay and Silent Bob have to deal with Hollywood snatching their likenesses for profit without their knowledge. Their previous film found them stopping a Bluntman & Chronic movie, based off the comic book based on their likeness. The sequel finds them trying to stop an all-female reboot (hence the title). On their journey, Jay will run into his old love of Justice. Since their meeting, Justice has had a daughter and if you’ve already seen the sequel Dumb and Dumber To, you already know how much such a story will lingle on this element.

It’s almost by design that Smith’s script eventually places Jay & Bob at a convention where they amble about in all manner of comic book and pop culture hilarity. This encapsulates so much of Smith’s mindset in perceiving comedy; heartfelt in the geekiness but bereft of anything all that new. It’s a picture that swims in the nostalgia not just of pop culture but within Smith’s own cinematic universe.

Compare the use of this picture of the characters to the likes of Clerks II, the last notable appearance of the duo. In that film, Jay went to rehab and found Jesus but still sells drugs at local commercial venues in his conflicting nature of faith and ethics. While not deeply explored, it’s an interesting progression of the character. This film merely locks the characters in a box, preserving them with their 1990s style punk vibe that many have come to see them for.

What’s most unique is to pair this film with Jason Mewes’ directorial debut of Method in the Mayhem, a meta-comedy that surprisingly was released about a month before this film. In that picture, Jason laments on how he is now typecasted as the character of Jay and can never escape such a role. He has earnestly tried in the past with several direct-to-video features but little has stuck. At the very least, Method in the Madness feels more personal in exploring the aftermath of a stoner seeking more than a role that has brought him more trouble than fame. Satirical and farcical, sure, but with at least an ounce of heart. The Jay & Silent Bob Reboot is more of a retreat to the familiar, keeping the old actors in their juvenile roles for at least one more go. Maybe another. Who knows; the duo seems to dig this iconography.

The Jay & Silent Bob Reboot comes branded as a fan-only affair, built more to appease the devoted than round up the new. It presents the young stoners in the way that many have come to know them in a film that never seems to stray from their nature. They will always be Jay & Silent Bob but that image is more fondly remembered from afar in the mind than reviving them once more for a reunion picture of sorts. Though still sincere enough to be the version of the characters that fans will love, their appeal has aged as much as the actors themselves.