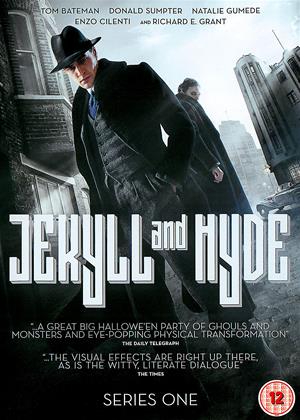 Reviews (2) of Jekyll and Hyde: Series 1

You wouldn't like me when I'm angry... - Jekyll and Hyde: Series 1 review by Count Otto Black

Anyone expecting something based in any way on the novel by Robert Louis Stevenson which happens to share the name of this series is going to be disappointed. Set 50 years later than the events in the book, it follows Dr. Henry Jekyll's grandson Robert as he tries to cope with the improbably hereditary consequences of his grandfather's drug-induced transformation. Which, since this series owes far more to "The League Of Extraordinary Gentlemen" than its alleged source-novel, means that he's basically the Incredible Hulk. Since it's also trying to copy "Men In Black", "Buffy The Vampire Slayer", and goodness knows what else, there's a secret organization trying to protect the world from legendary monsters, all of which exist, including those incredibly daft Japanese ones. There's also an even more secret organization of monsters who want to take over the world and do random evil stuff because... well, who says they need a reason? They're monsters, right?

I'm making this sound like fun. Unfortunately it isn't. The monsters are decidedly underwhelming, especially Mr. Hyde, who, in an obvious attempt to save money, is just Dr. Jekyll overacting, wearing a bit of eye-liner, and punching people in slow motion to show how strong he is. Some of them have mutations that are almost always covered by their clothing, and the carefully rationed CGI we do get to see looks cheap. Perhaps this is because a major but pointless subplot connecting the action with Sri Lanka ate into the budget, but they had to have it because otherwise a drama set in Britain long before it was even remotely multicultural wouldn't have included enough non-white characters to satisfy the demands of Political Correctness.

But what really kills it is the sluggish pace. Finding out basic information seems to take forever, including things the viewer already knows - it's two whole episodes before the hero, who by then has transformed several times into a completely different guy with superpowers, figures out that the original Jekyll & Hyde were the same person! In between, we get repetitive fights interspersed with too much long-winded plot exposition that doesn't really tell us much, and all-too-brief glimpses of the supernatural horrors that are meant to be the main attraction. The horror, by the way, is very mild indeed.

And then there's the acting. Nobody is noticeably good, and many of them, particularly the villains and the women, are absolutely dreadful - the obligatory love interest seems to be using an autocue. Richard E. Grant's the biggest star they could afford, but even he looks restrained compared to some of these rampant hams! Oh, and unless my ears deceive me, the Ultimate Cosmic Horror the baddies are trying to unleash is called Lord Trash. So maybe this is supposed to be a comedy? If so, they forgot to include any jokes other than that one.

This review is of episodes 1-4. There are another 2 discs to go, but I won't be renting them because I simply can't be bothered sitting through almost 7 more hours of this to find out how Mr. Hyde saves the Universe from Lord Trash.

well i love it - Jekyll and Hyde: Series 1 review by KA

great different take on the theme and just loving the characters so everyone likes different things so always take a look at something and make your own mind up , as some of the films i have liked others have hated and vice versa