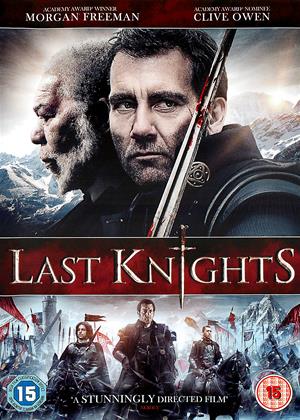 The color palette and tone of Last Knights reflects the decaying nature of the sword and sandal genre. It’s a bleak and dreary existence of washed out colors and tired actors. The genre is dying from a lack of originality, depth and (at this point) energy. Rather than seeing the current state as an opportunity for director Kazuaki Kiriya to inject some enthusiasm, he has turned in a picture that does not stray or invigorate. Whatever sense of action and adventure that was intended comes off more as a lazy husk of a genre film, desperately crawling on its last legs for a mere twinge of thrills to be had.

The muted Clive Owen feels very miscast as the loyal Commander Raiden, a knight devoted to the Bartok Clan. He coldly serves his elderly master Bartok (Morgan Freeman) without question. But when the master of the clan is beaten by the emperor’s advisor, Geza Mott, Bartok fights back and must be punished for his actions. Seeking complete humiliation, Geza sentences Bartok to death via decapitation from his own Commander. Raiden is shocked, but regretfully complies with the sentence. He must certainly seek revenge against such an inhumane tyrant for making him kill his master, but not before he crawls into a bottle and rapes some women before staging an assault against the bad guy.

There’s just no motivation to any of this tale. Much like Clive Owen’s character, it struggles to go anywhere or do anything. Everything feels far too bleak and hollow with nothing at all pleasing or engaging on screen. Just trying to describe the film’s bland tone and setting is making me tired. I could feel the boredom resonating off the screen from the actors who were clearly just phoning it in for a script that deserved nothing more. The actors try to remain cold and stoic, but you can sense the yawning. You just know they’re dreaming about starring in something much more fun and important as opposed to throwing on armor and pretending to be serious warriors. I started having daydreams about some better movies Clive Owens could star in. Maybe as an astronaut….yeah, I could see him as an astronaut….or even a scientist….

….wait, what movie was I writing about?

Oh, yes, Last Knights. Well, I suppose the film has one positive in that it features a very diverse cast of characters. There are white actors, black actors, Iranian actors, Korean actors and so on. It’s a pretty colorful band of warriors that get a chance who get to swing some swords. Say, wouldn’t it be cool if a capable director remade The Seven Samurai with a cast like this? Not a direct remake, mind you, but something in the same template as with The Magnificent Seven. They could save a town and do some real awesome anti-hero stuff. Maybe set it in the age of knights….where the knights have to save a town from a dragon army....yeah, that’d be pretty cool….

Of course, you have to have your sword battles in an action setting such as this. And, wow, does Last Knights leave you starving. The climactic battle at Geza’s castle would seem like another opportune moment to throw some real pizzazz at the screen. But it’s just a forgettable mess of poorly shot sequences and slow-motion focus. The battle takes place at night with so much armor and swords running around it’s hard to tell the good guys from the bad guys. Say, speaking of night battles, remember that massive fight scene from Lord of the Rings: The Two Towers? Wasn’t that such a well-choreographed scene with clearly visible effects and enough going on so you never felt bored? I remember seeing that in the theater…it was amazing to see on the big screen…..yeah, good times…..

….are we still talking about this Last Knights movie?

This feels as though it should be the last movie about knights given how this one seems so decrepit. With dull characters, lackluster fight scenes and a color palette that appears as a muddy gray, it’s a real chore to muster any emotion for this movie too serious for its own good. I can’t even be mad at Last Knights since it just doesn’t want to try, lifelessly lying on the ground as it wriggles through the motions with an even drier delivery. Watching this film is a draining experience, removing any hope there is for this genre that seems to attract the most half-thought scripts and the least amount of acting ability. Call it, pull the plug or shoot it in the face. Just put Last Knights out of its misery for being so boring it’s tragic.