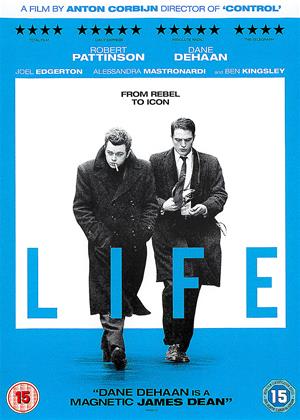 An intermittently compelling film about the efforts of photographer Dennis Stock to get those iconic Life magazine photos of James Dean. No film about James Dean and his starry 1950s circle could be without interest, but this is a leisurely, meandering piece that won’t suit anyone looking for action or plot. Indeed, the film almost grinds to a halt after an hour when Jimmy takes Dennis home to his Indiana ranch for some family time. There’s also a boring subplot about Dennis’s inability to relate to his young son. It’s Jimmy we want to see, and bigger cameos for Natalie Wood, Elia Kazan, Eartha Kitt etc.

But the main problem is simply that Dane DeHaan is miscast as Jimmy. Not only does he not look or sound like him, he comes over as mumbling, whiny and eventually irritating. Dean’s charisma and nervous energy are conspicuous by their absence. The problem is exacerbated by the casting of Robert Pattinson as Dennis Stock. As he showed in his riveting portrayal in Remember Me, he’s the modern actor who most closely reincarnates Jimmy.

This film is not bad. One issue with it is the ever-irritating James Dean character at its core - his petulant adolescent whinings, and his annoying habit of throwing quotes into every conversation to sound clever, make me want to yell at the screen for him to GROW UP!

However, James Dean is merely a puppet, as he was in life. The main character who gives us access to his world is the photographer played by Robert Pattison (like Nick Caraway lets us know Gatsby; like an academic lets us into Dylan Thomas's world in Set Fire to the Stars; like Ed Wood grants us access to Bela Lugosi). He is by far the more interesting character.

Some filler scenes in bars (with Eartha Kitt no less - and I had no idea James Dean knew her like that!) pad this movie out and it is overlong.

There are interesting scenes with Dean's family, but really, this story only comes to life when the photographer character is on the screen. He is the story. Not the egg-shell empty James Dean - a pretty face and a Hollywood puppet - who looked great + trendy + cool. But had minimal talent.

And I confess to a life-long hatred of bongos - (which the non-musical always adore) - and for some beatnicky reason, James Dean carries his bongo with him everywhere he goes.

Worth watching - but no more than average and the story is a bit thin and hollow. Like James Dean himself then...