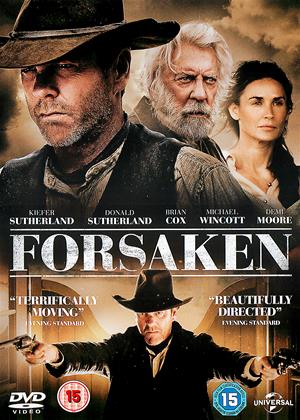 This is an unashamedly old-fashioned western, with echoes of Unforgiven, so comfortingly familiar that it’s impossible not to succumb to it. Kiefer Sutherland is the taciturn hero who can’t escape his gun-toting past, but can he stand by while the baddies run roughshod over the father who despises him, played by his real father Donald? Acting together for the first time, their real-life relationship adds an extra layer of depth to their feisty on-screen relationship.

You can guess the outcome, but for the duration of its 90 minutes it’s like meeting an old friend you haven’t seen for ages and didn’t realise you missed. There are dastardly baddies, a morally ambiguous good-baddie, an unrequited love subplot and a satisfying climactic shootout.

Most recent westerns have been revisionist, which makes this classic reading of the genre seem almost revolutionary. Jon Cassar, Kiefer’s 24 director, directs with smooth economy. The only problem is Jonathan Goldsmith’s occasionally orchestra and piano plinky-plonk score, which underscores every scene to the point of mockery.

No masterpiece, but eminently watchable.