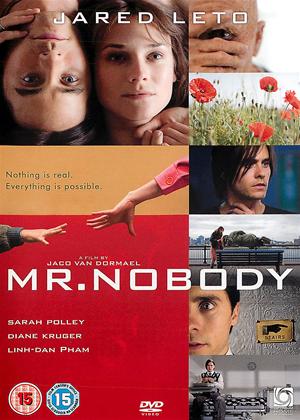 I loved this film, I am a huge fan of Jared Leto but the film was better than I had expected. I liked the story.

A Pretentious Arty Sci-fi Mess of a Movie - a Belgium/Canada Co-Production - Mr. Nobody review by PV

This movie reminds me of other huge, vast-ranging, pretentious movies which seemed to arrive in the 1990s and end around the time this was made. I am thinking of The Fifth Element, and the truly awful Tree of Life.

A great cast, yes, and some interesting scenes. But all too tricksy and self-consciously post-modern. Why not just TELL A STORY instead of all the endless faffing with alternative universes etc and all the pretentious cod-scientific guff.

I see it was written by the director who is French/Belgian - and also that this self-indulgent mess of a movie was partly paid for by our taxes via the EU, it seems. HOORAH! The whole thing must've cost tens of millions - all to pay for one director's derivative vision. Sigh...

An interesting watch, and enjoyable in parts - but boy, did it test my patience. And young people made up to look old just don't, somehow.

Probably one for the sci-fi fans and those who like tricksy Matrix-type games.

Mr. Nobody is a strange time-travelling movie from Flemish director Jaco Van Dormael. The movie explores the meaning of life, the choices we make and the way those choices shape our lives, it also delves into questions of truth and fantasy and manipulates scientific theories to make its point.

The movie is not an easy one to follow, the narrative jumps from the death bed of an elderly Nemo Nobody the last mortal on an Earth where man has reached quasi-immortality and technology seems to be the key source of communication; to the childhood of Nemo, which is split between his estranged parents, and his adulthood.

However it is not as straight-forward as all of this, as the key point of the movie is to query how the decisions we make affect our futures. The movie explores all the possibilities of Nemo’s life, branching out from a single moment in his childhood. It uses string theory, chaos theory (the butterfly effect) and the big bang theory to highlight its points and provide a deep undercurrent to the movie.

Unfortunately to the average viewer this all seems little more than a deviation from an already over complex narrative; which in itself is melodramatic and insincere. Due to the nature of the film’s narrative structure you have absolutely no emotive connection to the various characters in their various states of apathy and depression – all the characters seemingly faced with one or both of these states of mental disturbance. Although on several occasions you feel that a plot has the potential to be engaging and interesting the movie seems ultimately to shun drama and normal narrative, which is fine in many cases; however Mr. Nobody just doesn’t seem to pull it off.

When the film finally ends, which seems to drag on for an eternity, a key point in the plot is made clear; a point which if manipulated properly would have had far more of an impact on the movie from the beginning. However Van Dormael who also wrote the story seems to miss the point entirely. This movie struggles to fall anywhere within the art and entertainment genres, yet it fails to be interesting enough to be dubbed an “experiment” and just leaves you feeling lost and frustrated.