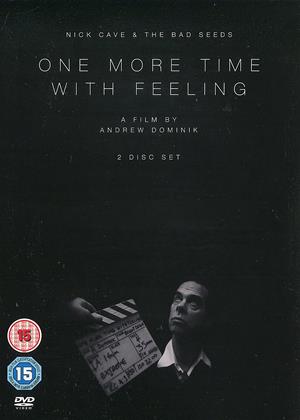 Synopsis:
Andrew Dominik's one more time with feeling is a remarkable black and white documentary which chronicles the creation of Nick Cave and The Bad Seeds' album 'Skeleton Tree'. Originally a performance based concept, the film evolved into something much more significant as Dominik delved into the tragic backdrop of the writing and recording of the album. The result is stark, fragile and raw, and a true testament to an artist trying to find his way through the darkness.
Actors:
Nick Cave, Warren Ellis, Martyn Casey, Thomas Wydler, Jim Sclavunos, George Vjestica, Else Torp, Susie Cave, Earl Cave, Nick Cave And The Bad Seeds
Directors:
Andrew Dominik
Producers:
David Fowler, Dulcie Kellett, James Wilson
Aka:
Nick Cave and the Bad Seeds: One More Time with Feeling
Studio:
Bad Seed Ltd
Genres:
Documentary, Music & Musicals, Performing Arts, Special Interest

Reviews (1) of One More Time with Feeling

Uninteresting and tedious - One More Time with Feeling review by RD

Oh dear, it all starts very badly with a blank screen and some odd voice over, then opens up to show an odd bearded guy in a taxi who waffles on a lot about nothing at all for a few minutes until they have to stop filming because, as they say, the camera isn't focussing properly. Cue blank screen again. Surely this is stuff for the cutting room floor?

There's a few minutes at the start of every film that grabs the viewers attention by making a statement of what the film is about, and this one says "amateur" and "disaster" and " not sure what they're on about" which is not a good start at all.

The film then continues with Nick in his hotel room walking about talking to the cameraman and changing his shirt, then asking if they want to do it again as something wasn't right, followed by more inconsequential waffling by Nick, this time back in the taxi. The talking is very tedious and doesn't say much at all. It's at this point that we wonder if the film is worth pressing on with. It might improve, so we do.

Next we are shown Nick in a studio, at a piano ready for a vocal overdub, which he starts with the backing of a disappointing rough foldback mix. The next few minutes show the beardy wierdy from the start of the film conducting string players, apparently during the vocal overdub but no, it's two overdub sessions edited together to look like they happen at the same time, hence two Nicks, one at the piano and one in the dark control room. It's not yet got up to the level of interesting but we press on, ever hopeful.

Next we have beardy wierdy starting a violin overdub, long notes over another rough mix. Nick is wandering about talking about stuff that doesn't make sense to ayone but himself, so after 32 minutes we baled out and hit the eject button. What a relief!

This is very amateur film making, with poor shots, daft dialogue and nothing at all to say. It doesn't appear to show the making of an album, just day to day tedium. Not worth pressing onto a valuable DVD, even less worth trying to watch.

Needless to say we didn't delve into the second "extras" DVD as 32 min utes of the main one was quite enough to have to sit through.

So give this a miss and just buy the finished CDs.