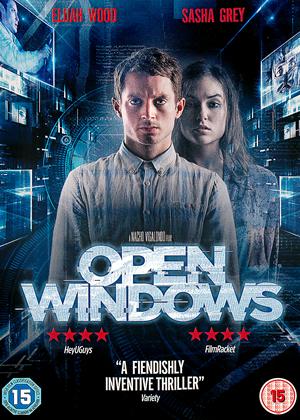 I would like to think that the further we’ve come with the general public’s understanding of technology that the same sensibilities could be applied to movies. The technological boogiemen present in such dated productions as The Lawnmower Man, The Net and Untraceable are such laughable thrillers that they’re viewed as missteps. But now we stumble once again with Open Windows, a film where the only thing more preposterous than the hacking of seemingly every webcam is the cynical setup placed within its confined perspective.

A creepy fan boy known as Nick (Elijah Wood) finds his heart broken when the actress of his dreams, Jill Goddard (Sasha Grey), turns him down for the dinner date he won in a contest. But an even creepier geek who happens to be Jill’s manager known as Chord delivers him the pervert’s dream: a complete digital view of Jill from her computer. Approached with the voyeur’s delight, Nick accepts the offer since he apparently has such loose morals. The obvious threat is that he’ll soon be discovered either by Jill or the authorities, but there are bigger dangers to worry about in how Chord toys with the two of them. Or is Chord being played himself? Or does Nick have a different motive for this level of access to Jill? And does Jill have an agenda in this ordeal as well?

Much like the Saw movies, this is a thriller that likes to pull as many twists out of its hat no matter how illogical or silly they may seem. There are double-crosses, collusions, faked deaths, staged deaths, exploding buildings out of nowhere and secret bunkers abound. It’s the type of film where the plot takes you for more of a tilt-o-whirl ride than a clever narrative. How exactly does one character have the kind of access to completely stage a fake corpse and alter his voice for staging his own phony demise? The movie never addresses this as it has far too many other farces to display.

Director Nick Vigalondo (Timecrimes) at least has a unique visual flair. The entire movie is seen through a desktop of various windows that lead to different webcams and cameras. It may be one of the most unique interpretations of a cyber-thriller for it’s original delivery appearing as though we’re watching the entire film through an operating system. The gimmick, however, wears pretty thin when it starts to lose its flair in the second act and go for far too many pull-outs and reveals. Who exactly is clicking through all these windows? Who cares, just keep pulling back the shot to reveal another desktop watching a desktop and you have an infinity twist formula.

I can’t help but feel that such a concept might be trying to make some sort of commentary on our interconnected world of social media and rise of hackers. Whatever message may have been implied is lost in a disgusting mess of vile characters pulling off ludicrous twists. There is absolutely no one to root for in this picture. It seems as though Elijah Wood’s character may have something to say about the over-obsessed nerd culture that has no scruples when it comes to sensitive and private information. But we never reach any meaningful lesson or moral in his arc. Ultimately, the only thing that can be taken away from such a movie is that you can’t trust anyone because everyone has access to everything about you and will exploit that for sick gain. In other words, it’s the same old technological boogieman tale with cyber-killers who exist almost entirely outside the realm of reality.

Open Windows is a thriller so toxic and vile that I almost hit ctrl+alt+delete to open the taskbar and end the program. I guess in that respect I can give Vigalondo some credit for playing with my perspective by immersing me in this desktop world, but the experience just made me all the more anxious for it to be over. It’s just another cyber-thriller too ambitious and too lacking in brains for it to be capable of technological suspense. If it just gave us something to latch onto, there could’ve been some hope. Just one likable character. Just one plan that wasn’t CSI levels of insanely false. Just a shred of morality within this despicable little tale and then I could appreciate the stylistic choices of the first computer monitor based movie. But that is all it appears it’ll ever be known for.