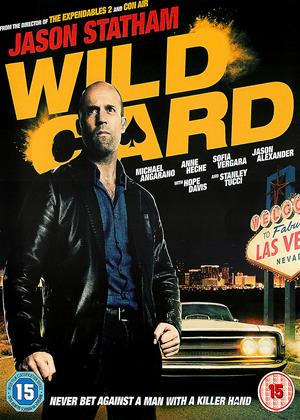 Jason, do that thing, the one with the feet etc. - Wild Card review by NC

Jason has a crack at whacking again, but is getting fairly adept. Safe was better, and transporters were some fun. He may actually be developing here, as opposed to non-de script Stallone, and fatty Segal. Can do a bit of acting here and there.....along with super-fit whacking...............

Give it a miss unless you enjoy depressing stories of alcoholism and gambling addiction! - Wild Card review by CS

Normally I quite enjoy Jason Statham films, as you know what to expect, lots of hard man action, fighting, car chases and gangster moves. But Wild card is completely different and many die hard fans will probably find this to be a very big disappointment, just like I did! There are a few good action sequences, namely two at best and in-between are an awful lot of dull, boring sequences dealing with the issues of alcoholism and gambling addiction. I found this to be an incredibly slow and boring film to watch. Whilst the acting is generally very good and this is what people seem to be saying about Jason in this film, the script and direction really don't stand up to it and let the cast down badly in my opinion! The beginning of the film is cringeworthy, even after you've realised what is going on! Personally I wouldn't recommend this to anyone, let alone someone who normally enjoys a bit of the usual action style movies you find Jason in. And the ending is a real let down, too rushed and cut off, like they had to finish the film before it over runs, but I had started to fall asleep long before then! Nope very disappointing I thought!!

Wild Card comes as a bit of a surprise in that it features something rarely seen for a picture starring Jason Statham: character and dialogue. He’s playing a real character with personality and dreams that are far more than window-dressing for a slew of action. He’s speaking dialogue that is much more profound than threats and cliches. That being said, it does still deliver on the elements many have to come to expect from Statham’s work.

Based on the novel "Heat" by William Goldman (which was first adapted to the screen in 1986 with Burt Reynolds) Statham plays recovering gambling addict Nick Wild. He wants to flee to Corsica, but ends up stuck in the slimey realm of Las Vegas. To make ends meet, he takes on various odd jobs acting more or less as security. After faking a beating in order to help out a poor guy impress a girl, Nick’s latest job involves escorting rich boy Cyrus (Michael Angarano) around Vegas for protection while gambling.

Between his current gig, he takes on a side job of avenging a battered woman who met the fists of some thugs who raped her. And what starts as a simple tracking down to sue some punks transforms into a revenge mission with Nick turning into a violent MacGuyver. His target is mafia man Danny DeMarco (Milo Ventimiglia) residing in his swanky abode with threatening guards. Nick's weapon of choice? Anything within his grasp. Be it knives or ashtrays, he subdues his enemies with incredible ease.

At this point one would assume that the movie has gone into full-on action mode with Statham kicking and punching anybody who wants some. Surprisingly, director Simon West does his best to keep the fighting pulled back just enough so that Statham has a little more to do. There’s an impressive scene after the hotel assault where he hops on a blackjack table and feels luck is on his side. He continues to pile up the chips until he has enough to leave Vegas. But just before he cashes them out, he pulls back with that cold look of an addict. It’s not enough that he has plenty of money, but that has an awful lot of money. The kind of money that he can spend on anything without a care in the world is the gambler’s dream. He naturally bets it all and loses it all, but that flawed personality is effectively conveyed by Statham’s crass and frustration.

There are even a few moments where I was positive a fight was going to break out as when Nick is questioned by DeMarco’s mob boss Baby (Stanley Tucci). Nick is about to be knocked off by Baby if the allegations of his attack on DeMarco were proven true. He manages to not only talk his way out of this situation, but embarrass DeMarco in the process. This, of course, is in between some more violent scenes since that appears to be a requirement of Statham’s contract.

For what it’s worth, the fight scenes are uniquely staged with some great camera angles and pleasing soundtrack choices. My only gripe is that the slow-motion is used a tad too much for the money shots of smashing noses and cracking jaws. The dialogue is delivered exceptionally by Statham who gives a solid performance for such a character. The drama of him interacting with others as the Vegas fix-it man show some signs that maybe Statham has it in him to be more than just your standard action baldy. It’s almost a shame that so many fight scenes have to bleed into the script in such an overly-produced manner.

Wild Card isn’t exactly going to redefine Statham’s action image, but it does showcase that there is more of an actor behind all the fists. This was apparently a personal project of Statham’s that he wanted to produce over the course of a few years before he showed it off to director Simon West. It’s a project I’m certainly glad he displayed an interest in as a sort of baby-step to moving onto more different and challenging projects. Now he just needs to throw himself harder into something with more character and he’ll achieve that range few action stars are capable of tapping.