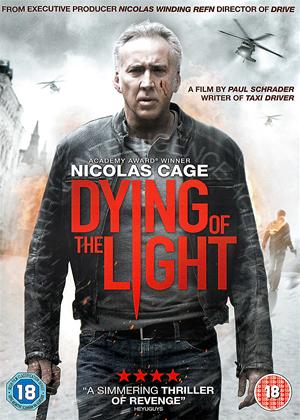 Reviews (1) of Dying of the Light

Nick goes nutty....but always did. - Dying of the Light review by NC

Actually not bad as goes along fairly well. At least sat and watched whole film. Never saw Cage as a good actor as always seems very artificial in what he does and says, bit like Mel Gibson, but is watchable film with some core story........

Dying of the Light review by Michelle Sommerville - Cinema Paradiso

While it might not be the most original storyline, Dying of the Light is still an entertaining action film. Cage and Yelchin work together in a weird sort of buddy-cop way, which isn’t necessarily the usual roles for them. Overall, it is a film worth watching, but probably not getting any major awards.

The film follows Evan Lake (Nicolas Cage), a veteran CIA agent who has just been told he has a progressive form of dementia. To make matters even worse, he is being forced to retire from the only job - and life - he has known. It is then that Lake’s protege Milton Schultz (Anton Yelchin) discovers the possibility that Lake’s nemesis - terrorist Banir - who has long been thought dead, is actually alive. Be it his condition making him erratic, or his dedication to his job, Lake and Schultz set off to once and for all eliminate Banir.

We can all agree that Nicolas Cage has been apart of both great and terrible films. He does seem to be making a comeback of late - Tokarev/Rage is good - and I like that. He is a good actor that is still trying to find his niche, and I think action films like this might be it. He doesn’t look like he normally does, and immersed himself into the role, like only good actors can do. His co-star Yelchin is also a fantastic actor. For someone so young, he has worked with a lot of big-name stars, and has become one himself. The film would have been absolutely horrible had it been with the originally announced leads - Harrison Ford and Channing Tatum.

What really let the whole film experience down has been the behind-the-scenes fights and politics. The word is that writer and director Paul Schrader had been removed in the post-production stages, and the film reworked without his input. Cage and Yelchin have supported Schrader, but the whole fight has been off-putting.

There always needs to be a driving force in a film; something that pushes everything into action. Dying of the Light’s is clearly Lake’s dementia. Not just normal dementia, but one that is known to cause “inappropriate reactions”. This effectively gives Lake the excuse to go off on his mission, but isn’t the most creative invention.

Reviews have been quite negative. For the most part, they have been criticising Schrader’s work, and the lack of originality of the story.

As an Australian, I liked how part of it was filmed in my home country; but that doesn’t have much to do with the film itself. I would have given it 3.5 stars, but as I can’t do halves, I bumped it up to 4. Overall, it is a good film to sit back, watch, and not think too hard. Of course not all films can - or should - be like this, but The Expendables franchise has shown us all that that sort of thing can sometimes be acceptable.