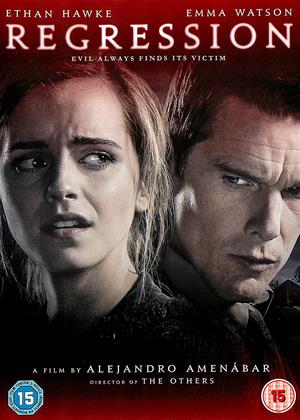 This slowly unravelling story features a typically intense performance from Ethan Hawke (as Detective Bruce Kenner), and features UK actors David Thewlis (Professor Kenneth Raines) and Emma Watson as the shy young victim at the centre of it all Angela Grey. It is written and directed with great, gloomy, foreboding flair by Alejandro Amenábar.

The cast are excellent, which is just as well during the early stages of ‘Regression’. This first act looks great, but could uncharitably be described as ‘a lot of people standing around talking.’ This is a necessary price to pay if you are to appreciate and fully understand the twists and turns events subsequently take.

The lack of traditional jump scares indicates this is intended as a subtle, thinking person’s horror and as such, works very well. Grey’s burgeoning friendship with Kenner is charming and you feel pleased she is beginning to see an end to the traumas she has been put through. She is very easy to sympathise with, as Grey discovers. And yet it is a mistake to take anything at face value, because in true demonic possession style, things are not always as they seem.

Despite being top billed, Watson isn’t in this a whole lot, and yet events circle around the character of Grey. Watson has become a somewhat controversial figure, with some questioning her talents as an actress and others lauding them. It is difficult to know why this is. Perhaps it is because she uses her platform to highlight women’s rights; perhaps it is simply because she is educated and successful beyond acting; perhaps it is because she seems successfully to have progressed from child star to adult actress. Or perhaps I am easily pleased (who cares, really?) – I find her quietly impressive here; she holds her own amidst some exemplary performances.

Is this a perfect film? Not really - it could have benefitted from losing 10 minutes of run-time, and it needn’t have taken quite so long to get going. Also, the final twist could have been given more gravitas. But ‘Regression’ is a very solid, expertly produced mystery and I enjoyed it.