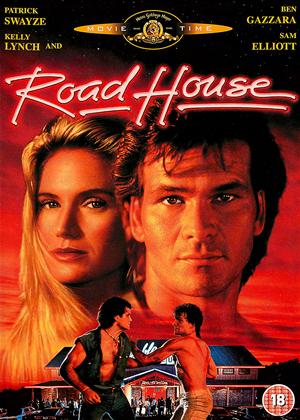 Synopsis:
Dalton (Patric Swayze) is a legendary bouncer who comes to Jasper, Missouri for a special purpose: to restore order at the dangerous Double Deauce bar. But as, one by one, he rids the bar thugs, hoodlums and hit men, he incurs the wrath of their employer - the notorious racketeer Brad Wesley (Ben Gazzara). The town lives in fear of Wesley, but Dalton is ready for action. He confronts Wesley's goons on one spectacular fight after another, but when they strike back with deadly force, Dalton knows he must face the crime boss himself in a blistering battle to finish.
Actors:
Patrick Swayze, Kelly Lynch, Sam Elliott, Ben Gazzara, Marshall R. Teague, Julie Michaels, Red West, Sunshine Parker, Jeff Healey, Kevin Tighe, John Doe, Kathleen Wilhoite, Travis McKenna, Roger Hewlett, Kurt James Stefka
Directors:
Rowdy Herrington
Producers:
Joel Silver
Writers:
David Lee Henry
Studio:
MGM
Genres:
Action & Adventure, Thrillers

Cheesy acting, corny characters, hilarious dialogue, mindless fisticuffs, knife fights, gunfights, monster trucks, women with big hair, men with mullets, girls who wear dresses that look like tablecloths, old men who are martial arts experts, a bouncer with a degree in philosophy - the list goes on... This film is truly awful - yet it's enjoyable. It's so bad it's good.

The storyline (such as it is) is of the classic western variety : stranger comes to town, cleans it up, meets local girl, leaves town - or something. Here it is: Dalton (Patrick Swayze) is a famous super-bouncer hired to clean up rough bar but is a little on the small side so gets a few laughs (dialogue: "I thought you'd be bigger") meets local doctor (Kelly Lynch) when being stapled for a knife wound (dialogue: "Pain don't hurt"), calls in old friend Wade Garrett (Sam Elliott) for assistance (dialogue: "I'll get all the sleep I need when I'm dead"), Dalton beats up local hard men, takes revenge on local businessman / baddie Brad Wesley (Ben Gazzara), swims in river with girl.

Never mind the awful acting, the f-ing and blinding, the violence, assorted bare chests - just sit back and let its awfulness wash over you. You might enjoy it too. Other than the sheer cheesiness of it, the best thing is the soundtrack. The bar band is the Jeff Healey Band led by blind Canadian guitarist Jeff Healey and they're excellent if you like blues / rock - I saw them live a good few years ago.

Regrettably both Patrick Swayze and Jeff Healey (not to mention Ben Gazzara) have all been called to that great roadhouse in the sky, so sadly there'll be no more films quite like this again - perhaps that's just as well. 5/5 stars for the cheese + music :)