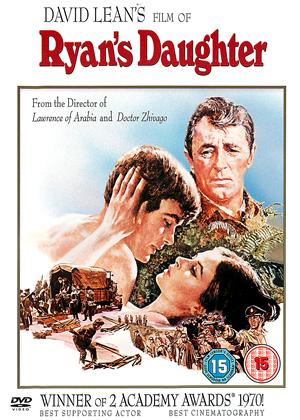 I recently visited Dingle on the west coast of Ireland where this film was mainly shot so thought I would have another go at watching it all the way through (after a number of failed attempts in the past). It hasn't aged well. Yes, the scenery i.e all the stuff that's in the background, is absolutely stunning and brilliantly filmed - there's even a nod to the match scene in Lawrence of Arabia. As to the rest it's very turgid fare and miscast in a lot of roles - Robert Mitchum looks totally uncomfortable despite a reasonable Irish accent. There are no Irish actors at all as leads and the depiction of the locals is so stereotypical and at best insulting to Irish people. Trevor Howard (as a prototype Father Jack?) is good as the priest, however. Leo McKern is always reliable and I suppose John Mills should get some credit for his 'theatrical' performance of the village idiot. Sir David Lean was justifiably renowned as a visionary film director but he should have steered clear of sex scenes. Deary me! And, it's a long, long, long film! 3 hours, 24 mins the version I watched.

I think this film got some appalling reviews when it came out in 1970 and I'm afraid most are still merited. When you think of the absolute majesty of Lawrence of Arabia, Ryan's Daughter is a travesty. So, unless you're a film school student or just like the scenery on the west coast of Ireland and you can't get there to see it in person, then avoid, avoid, avoid!