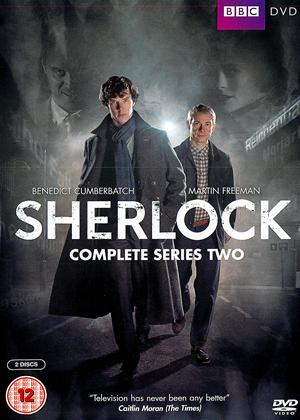 Catching up on this franchise all at once because I missed it first time round, I'm noticing a peculiar and unfortunate progression. The first series would have been five-star if its middle third hadn't been so silly. This time, I'm slightly reluctant to go as high as four stars. Benedict Cumberbatch is perfectly cast as a modern Holmes - in fact, he's so good that he almost redeems the growing number of flaws all by himself. And Martin Freeman does quite well as Watson, considering that his character is steadily turning into a put-upon schmuck who, in a relentlessly overdone running gag, constantly fails to persuade anybody that he and Holmes aren't a gay couple. But the whole thing seems to be drifting in the direction of self-parody. Instead of cleverly adapting the original stories with new twists, almost every reference to Conan Doyle's work takes the form of an excruciatingly bad pun.

And it appears that they must have asked one of those people who use the word "awesome" far too often what would make Sherlock Holmes awesome, because he's clearly trying to be more like Batman. Turning Moriarty into a gibbering loony with literally no purpose in life other than to annoy Holmes in needlessly complex ways was a hideous mistake, but understandable if the scriptwriters felt that Holmes had to be up against the Joker, or anyway, somebody as much like the Joker as possible - in this case, Graham Norton's Evil Twin. But that sort of thing doesn't really come off unless your hero lives in the kind of fantasy world where it's normal for good guys to dress as bats and fight baddies made up to resemble playing-cards.

So now we have Irene Adler as a lesbian dominatrix (Catwoman's background in the graphic novel "Batman: Year One"), the Joker - sorry, I mean Moriarty - trying to be the Riddler as well, and another villain who was clearly taking notes during "Batman Begins". As for the crimes our hero solves, the kind of cases he's traditionally good at - crimes the police are baffled by, or puzzles brought to him by members of the public that they couldn't take to the police because it isn't clear that a crime has been committed - are sidelined to such an extent that even Watson comments on it. Instead, we get vast international conspiracies in which the British government is up to all kinds of shady stuff, and the Americans are automatically downright evil. It's all very well for the writers to display their fashionably anti-establishment political views, but do they have to be shoehorned into a show like this where they positively get in the way? And was that the worst CG Hound Of The Baskervilles ever or what?

Ah well, at least Moriarty won't be back for the third series. Well, I hope not. But given the fact that Sherlock Holmes very definitely died at the end of Series 2, but nevertheless returned for Series 3, I wouldn't put it past The World's Worst Actor to escape from the morgue and torment us some more...