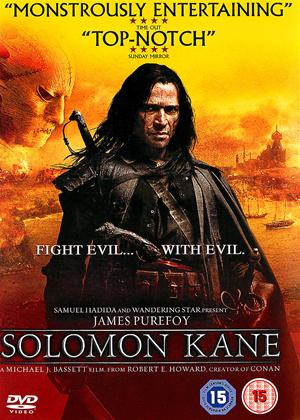 Synopsis:
Solomon Kane is a brutally efficient 16th Century killing machine. Armed with his signature pistols, cutlass and rapier he and his men unleash bloodlust as they fight for England in war after war across all continents. Things change when Kane is visited by the Devils' reaper, dispatched from the depths of hell to lay claim on his corrupt soul. Solomon has to redeem himself by renouncing violence and devoting himself to a life of peace. As Kane embarks on his newfound spirituality he has to face the ultimate test when he begins his journey across an England ravaged by diabolical human Raiders. Will he jeopardise his own soul by re-embracing his murderous talents for a higher cause?
Actors:
James Purefoy, Max von Sydow, Rachel Hurd-Wood, Mark O'Neal, Robert Orr, Richard Ryan, Frantisek Deak, Christian Dunckley Clark, Ian Whyte, Thomas McEnchroe, Andrew Whitlaw, Robert Russell, James Babson, Marek Vasut, Geoff Bell, Lucas Stone, Samuel Roukin, Patrick Hurd-Wood, Pete Postlethwaite, Alice Krige
Directors:
Michael J. Bassett
Producers:
Paul Berrow, Samuel Hadida, Kevan Van Thompson
Writers:
Michael J. Bassett, Robert E. Howard
Studio:
Entertainment In Video
Genres:
Action & Adventure, Sci-Fi & Fantasy

I am presuming that Solomon Kane is a comic strip character, as the film has that feel to it. The plot is so simple that there is virtually no plot. Without giving too much away, Kane has a date with the Devil and is desperately trying to hold onto his soul, que a series of 'Conan the Barbarian' type adventures. In fact this is really simply a re-make of all those 80's fantasy films like 'Conan' and even a bit of 'Sinbad' and Greek Myth style thrown in for good measure.

The special effects are very good, but too computer generated to the point that very little in the film appears real. Again few of the effects or scenes are original with many elements pinched from other films, I'm sure you will recognise glimpses of 'The Mummy' , 'Harry Potter' and a thousand and one other fantasy films in here. This almost looks as though it was made to be a computer game and the film came second.

A good action adventure film for the family with nothing too scary for over ten year olds, just a good bit of Saturday night brainless fun. The wizard, Devil and monster bots might be a bit too scary for little 'uns though. And that's it, no plot so you don't need a brain to watch this, just some beers, pizza and popcorn and you're away.

Good subtitles for anyone with a hearing loss also.