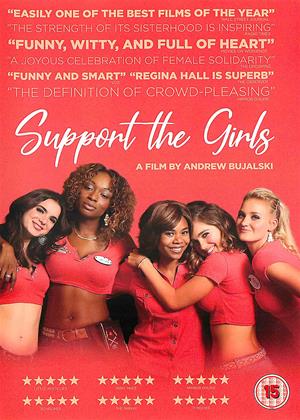 Reviews (3) of Support the Girls

Mundane and disappointing - Support the Girls review by barrygr@ysemail.com

Seemed to be just a boring account of a woman trying to run a Hooters-style bar and diner, and all the related management issues. Gave up after about 45 minutes, as there was no entertaining storyline evolving - not even a feminist message.

This film is set in 'Double Whammies', one of those (to an English eye) bizarre places in the US that rest on the rank exploitation of certain-looking young women. But we soon get the point that to gaze upon Double Whammies’ worn wooden surfaces and bleak staffroom is to know any sticky venue or chain restaurant where the staff are all easily replaceable and the (inevitably male) bigwigs work less and are paid far more. And in case you think this is going to be some sort of feel-good comedy, you know immediately that it will be anything but, with the opening scene showing Lisa (the quite superb Regina Hall) already crying in her car. The cause of the tears — which she deftly blots away before they smudge her silver eye shadow and give the lie to a cheery smile — are unknown, but from that point her day descends into a mess of marital rows, endless staffing issues, attempted robberies, casual misogyny and so on.

Lisa’s job it is to nurture and protect her fleet of scantily clad charges and keep her peppery boss (James Le Gros) from sticking his nose in too much. Regina Hall brings a stoicism to Lisa that steals whole scenes, even when the mayhem has ebbed away. Surrounding her are strong performances from Haley Lu Richardson as Maci and Shayna McHayle as Danyelle. The former fizzes with a stream of unbridled, cheerful energy that never feels fake (“Chocolate milk rules!” she yells, and she makes us believe her), while the latter taunts the manager’s unwritten policy that only one black woman can work per shift, but sucks it up for Lisa, whom they both adore. Indeed, the gaping issue of institutionalised racism and sexism is very subtly raised early on, as a batch of new recruits learn the ropes. Writer-director Andrew Bujalski is sure not to make light of the matter, but spins it to make the bonds between the women tighter - their lives may seem 'ordinary', but their battles are universally relatable.

There's some rather stereotypical views of Texas on offer, and the film perhaps goes too easy on the males, who are typically portrayed as easily manipulated fools. But it's a rallying cry for any woman who has been put through the ringer in a man’s world and still been there for the people around her. “Sad dudes is my business,” she tells her soon-to-be ex. Bujalski also observes with some subtlety the social divide that makes Lisa pick these blue collar burger-eaters over the rich folks she used to serve at her former steakhouse. At least here, she can kick the worst idiots out. Hall’s performance — tender, tough, empathetic, controlled, crumpling from tears to laughter in a blink, is something else, and the low-key but terrific ending is worthy of some of the great directors. A very clever, subtly feminist piece.

This may have been an attempt to show the problems of running a bar with scantily clad waitresses, but it meandered along seemingly without a comprehensible story-line, incoherent dialogue, and banal characterisation. Can't imagine what the message was supposed to be.