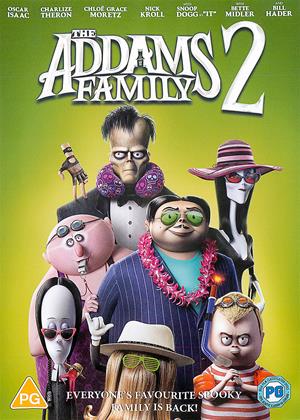 Reviews of The Addams Family 2

The once altogether spooky family of the Addams were once the go-to for the darkly comedic of family antics. The comic strip characters have been known as such since their television debut and remained so even with the film adaptations of the 1990s. But the animated interpretation of the 2019 animated film proved to be a downer of how mundane the Addams can appear when filtered through modern and safe animation for kids. The film even resolves with the Addams being the family that saves the day while teaching their suburban neighbors about acceptance.

The good news is that bits and pieces of The Addams Family 2 do not falter in the same way. It presents a more intriguing aspect of the strange family and finds more dark antic to embrace rather than safe routes. Consider how the film centers around Wednesday Addams and her desires to find some acceptance of her own. She’s a mad scientist who has been able to master such a feat as transporting the traits of an octopus into her Uncle Fester. This would be the hit of the science fair if it weren’t for school undermining her talents and her family being almost ambivalent to her success. Nobody seems to understand her.

Her parents of Gomez and Morticia decide that the family needs some bonding time and a vacation is just the route to do it. With Granny watching the house so a house party gimmick can ensue as a C-story, the collective of Gomez, Morticia, Pugsly, Fester, Wednesday, Lurch, and Thing all go on a road trip. They plan on visiting a variety of locations across the US to learn what it means to appreciate nature's weirdest and darkest wonders.

Following the Addams on this trip is a fellow mad scientist who has taken an interest on Wednesday. He believes that the girl may not really be an Addams and aims to find out with DNA evidence. Before that evidence can be processed, however, the Addams already have doubts. Fester reveals that after Wednesday’s birth, there was a bit of an issue in the delivery room where Wednesday may or may not be an Addams. Doubts linger and the questioning of lineage and relation comes up on the road trip involving monsters, explosions, and horrific beauty pageants.

All that staging is a huge step out from the last film. The humor, however, remains stuck in neutral. The gags all feel held back to either be safe or topical. The funniest bits are relegated to the most simplistic and passing of puns. At the dinner table, Gomez asks if the children are present for dinner. “Children?” says Fester. “I thought we were having chicken.” That’s a decent bit if it were on top of better jokes but that’s sadly not the case.

The most lackluster element is the inclusion of Cousin Itt. The hairy member of the Addams family drops by on the trip, once more voiced by Snoop Dogg. The film goes out of its way to let you know it is Snoop Dogg doing the voice by citing how the creature has music industry connections, boasts a theme song by Snoop Dogg, and later sings exactly like Snoop Dogg in the film’s obligatory dancing finale.

There are shades of a better Addams Family movie present in this animated sequel. It builds on a few characters, has some fun with the darker elements, and tries to stage a story that is both in step with the family’s nature and an interesting aspect to explore. But the film merely showcases just how held back this family feels in animation, where anything is possible but not when heavily restricted by family animation standards.