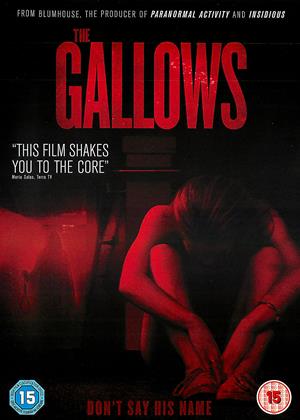 Reviews of The Gallows

As a lone teenager wanders through the dark and creepy corners of a high school, he spots a very small opening in a secret room. Where it leads is unclear, but it can’t be good judging by the darkness. The teenager scoffs with a “screw it” mentality and proceeds into the dark opening. It sets the tone for how The Gallows plays out as another haunted house picture - eager to get to the next scare by any lazy means necessary.

The writing and directing duo Travis Cluff and Chris Lofing return to the stage template once more after their slasher-musical Stage Fright. They stick too close to their original storytelling for a killer hiding in the curtains seeking revenge on a family line. Rather than play up the scenario with a certain camp value, Cluff and Lofing retreat to the cliche format of found footage. I can’t help but feel that Google missed out on a chance to promote their failed Google Glass device. It would be much more believable to maintain the action instead of making the audience question who is filming all this and why. The Gallows features a group of four teenagers running around with a camera phone and a portable HD camera. The camera is always kept on to film everything as opposed to conserving on battery power to use for the camera light in the darkness.

The legend for this spooky high school hijinks picture centers around Charlie, a student who died when a noose snapped around his neck during the school play of The Gallows. The Charlie in the film has nothing to do with the Charlie ghost pencil trick trend, though that didn’t stop the marketing department from jumping on that hype train. The legend is that his ghost haunts the halls with his noose-themed theatrics of terrorizing and spooking anybody who ventures in after dark. How do you get the teens stuck in the building? The first act whips up some two-dimensional students which - while accurate to the antics of most high schoolers - doesn’t make for the most likable protagonists.

A simple jock makes for a horrible actor when trying to play the lead role of the school play. He’s only doing this activity to get closer to a girl obviously. As an easy out for not turning the play into a disaster, he decides to break into the school after hours and turn the set into a disaster the night before the play. He does so with the help of his rowdy friend with the camera and his crazy-girl companion. And then the jock’s crush shows up at the school to find out what he’s doing. The victims all assembled, the doors can now be locked and the bigger jump scares can begin.

For such an elaborate setup, the build up to the scares lacks any direction or logic. All the doors in the school are locked. So, of course, let’s go through the creepy, boarded up door in the room of records instead of trying the windows. It’s just as well considering when they actually get to certain windows that can be opened they screw that up as well. Now I don’t want to be that one guy in the theater who screams back at the screen for how stupid these kids are. But when even the characters don’t care what they’re doing or where they’re going, what reason is there to root that these kids make it out alive?

And it’s not that there isn’t a decent creep factor to the areas these kids venture inside the haunted high school. The dark hallways of what seems to be another dimension hidden away in the school basement is generally pretty frightening the way it was shot. It’s just a shame that so much extra horror decals are thrown in to keep the low-rent fright train chugging along. It’s the usual device of something being in a shot one moment and then changed when looking away. The teens tear down the set and return to find the noose ready for a hanging. Nothing is on stage and then the killer is on stage. The whole noose motif grows so ridiculous to the point that the characters will turn away and an entire area will be littered with nooses. Of course, in order for all of this to happen, the teens have to become separated for little reason. Sometimes the scene just cuts to them being lost and sometimes the characters will just leave the group for no reason other than a dizzying panic. The script can’t be bothered with logical reasons for splitting up - it has to race as fast it can to the next spooky hallway or hanging one of the characters.

Despite some mere glimmers of terror, The Gallows mostly just twists in the wind as another sloppy serving of the found footage genre. It also features probably one of the lamest horror villains in that all you’d need to defeat his slippery nooses are a very sharp pair of scissors. One big snip and the terrorizing game of hangman is over. Then again, you could just smash one of the several windows in the building to get out as well. But why spoil the fun when the ghost of Charlie went to all this trouble of creating the high school from hell as he chases you around the halls? He worked really hard on all this and these teens are going to be frightened by it no matter what silly contrivance the script has to weave to make it happen.