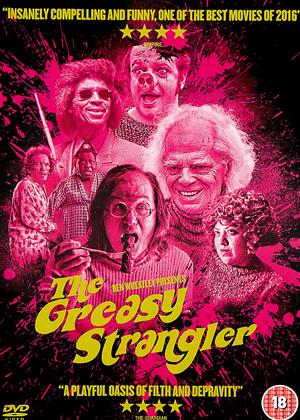 Reviews (4) of The Greasy Strangler

The Greasy Strangler is a really bizarre, original film that is genuinely unlike anything else I've ever seen. It's the sort of thing that people are either going to love or hate, I'm the former, my girlfriend despised it and couldn't watch the whole thing. It's so different that it's difficult to say that it's a good film; it's a very interesting experience, and I found it very funny. Give it a go if you like the weird and different, and if you're not easily offended or grossed out! I understand that it's already becoming quite a cult-favorite, and I imagine that in years to come it will be considered a surreal comedy classic.

Anyone who enjoys a good film, whatever the Genre, will, in my opinion find this film a complete waste of time and energy. Probably the worst film I’ve seen. Not sure what I expected, not sure how to sum it up either. Terrible, trashy and crass I think sums it up.

Get ready to get greasy - The Greasy Strangler review by JB

Utterly bonkers, unforgettable, gross, but brilliant.  Not for the squeamish or Daily Mail readers, or anyone with an aversion to cold slimy grease.

I'd heard about this from a Facebook film group I'm in so was intrigued. It has a indy film feel and plays like an odd mash up of Ghost World and Napoleon Dynamite. With extra perv. I like odd and weird so I did enjoy it, especially the musical score but damn it is bizarre and does push it for sure. If it's your thing and you want a change from beautiful perfect bodies and shiny polished Hollywood film fare then give it a try. It is certainly worth a look but if odd films aren't your thing don't be surprised if you finish it either confused, hating it or both.

There’s an intoxicating allure to the gross, goofy and extremely offbeat nature of The Greasy Nature that makes it as entertaining as it is odd. Watching this movie is like watching something from another planet as I found myself marveling at just how such a strange movie came into existence. It’d be easy enough to despise it as being an intentionally disgusting and annoying picture, but it’s far more fun to try to decipher and marvel at all its strangeness. This is a movie so bizarre it tries to find humor for a full two minutes with men in their underwear discussing the pronunciation of potato. And that’s the least crazy thing in this picture.

The father-son duo of Big Ronnie (Michael St. Michaels) and Big Brayden (Sky Elobar) are in the business of running disco tours around their dumpy town. When they’re not swindling tourists out of their money for false promises, they strut around their house naked while eating the greasiest of food. To the cranky and well endowed father Ronnie, the greasier the food, the better. The tubby Brayden finds this diet suspicious, considering the string of murders going around town of a killer known as The Greasy Strangler, a monster covered entirely grease.

The movie holds no mystery about who the killer might be as we see all of Brayden’s kills, his washing-off of the grease at a car wash and his constant need to shout at people that he’s not The Greasy Strangler. But Brayden is too busy to be concerned with his father’s nightly activities. The obese and quiet Janet (Elizabeth De Razzo) soon takes an interest in Brayden, leading from an awkward dinner to awkward sex. Just when their relationship appears cute, Ronnie cuts in to steal her away and turn a love triangle into the most vomit inducing of affairs.

To even describe the full ugliness of the picture would require placing the most disturbing of images in one’s mind. I could find various ways to write about how weird it was that the Greasy Strangler pops eyeballs out of people’s skulls and gobbles them like malt balls, but all I can muster is that it’s just weird. The dialogue is written with a hefty dose of crazy from the Tim & Eric school of funny filmmaking. Certain scenes devolve into ramblings of one word or phrase with a level of amusement that is practically indescribable. As Janet and Ronnie embrace their relationship, they mock Ronnie with the loud chanting of a pet name, extended long past the point of there being any meaning in the name. There are dozens of weird scenes such as this.

One could spend hours trying to find some meaning behind the strange killings, the bonding of messed up families, the consistently greasy settings and the ridiculously annoying music. There is madness in every scene, from Ronnie dunking his hotdog into a bucket of grease to a disco dance sequence with the most revealing of clothing. It’s hard to tell if the acting is competent given that the characters must speak strange phrases and shout repeatedly at one another. I can say that Michael St. Michaels does an admirable job as a creepy old man that comes of as sinister as he is gross. And Sky Elobar isn’t too shabby as a nerd with an attitude. Everyone delivers their lines as though they’re trapped in a Tim & Eric skit, doing their best to be funny in scenes with dialogue that is simple to read yet surreal to comprehend.

I’m sure it would please first-time director Jim Hosking for me to proclaim the film to be too vile, puke-worthy, inhuman and otherworldly to be a good movie. While the picture never really excels past its funky premise to find something funnier, I must admit that I found myself drawn in by the picture’s charm that is shrouded in grease, poop and penises. It’s not challenging enough to be great, but just bizarre enough to be too weirdly intriguing to ignore. I may not praise The Greasy Stranger from the rooftop, but I’ll never forget its filthy antagonist or its unforgettable lines about potato chips.