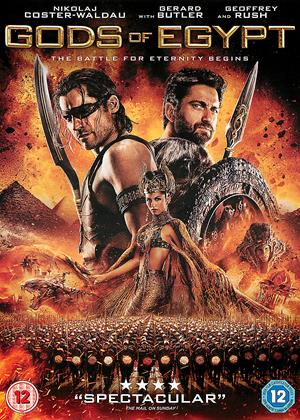 Reviews (3) of Gods of Egypt

A Rollicking Visual Ride - Gods of Egypt review by Alphaville

This irresistible cgi extravaganza about gods and mortals in ancient Egypt is a wonder to behold. There’s more imagination packed into its two hours than in all the Marvel films put together. The images are ravishing, chock full of imaginative design. The fantastical non-stop action, with elements of Star Wars and Indiana Jones thrown in alongside the swords and sandals, is seamlessly executed with technical brilliance. Sure it’s nonsense, but the fact that it revels in its cheesiness just makes it all the more engaging.

Gerard Butler as a strutting 10ft-tall Scottish Egyptian baddie-god who can metamorphose in to a monster? Geoffrey Rush as a cantankerous spaceship-dwelling sun god who burns every mortal who looks at him? A forlorn giant sphinx who’s response to having his riddle solved is ‘Oh, bother’? Air chariots pulled by flying beetles? You gotta love it.

Alex Proyas, totally in command of his green-screen medium, directs with sweeping style and verve. His best film since The Crow and Dark City. Ignore the disdain of arthouse reviewers, engage child mode, sit back and enjoy the sense of wonder that only cinema can engender.

Not good - Gods of Egypt review by gazmb

Good God what a dreadful film. The acting is dreadful the script is pathetic. The special effects are poor as well as well as some of the set scenery. What a waste of a rental .

To a 70+ -year old, one of the most enjoyable, and subtly amusing (sneaky little bits of adult humour are there if you listen close enough ;-))) pieces of Saturday morning entertainment I've watched recently. Sit back, return to your youth, put up your feet, grab a bag of munchies and a bottle of wine (you didn't get that at Sat morning cinema) and rejuvenate yourself. Enjoy!

And I've only just scrolled up to read the reviews 1 & 2 . . . nice surprise. At least I'm not the only person who uses these videos as they should be used - rest, relaxation and amusement, and not as an excuse to exercise their so-called intelligentsia via their sit-upons!

I was somewhat relieved to see a picture as ludicrously conceived as Gods of Egypt, considering the bad movies that have risen from the cold winter months in past years have been particularly awful. Whether insultingly offensive or drearily dull, my tolerance for terrible has been put to the ultimate test. Just this year I found myself cringing in my seat with the likes of Dirty Grandpa and Fifty Shades of Black. Gods of Egypt seemed right on track to be another woeful walk down the sword-and-sandal genre with some of that popular Hollywood whitewashing controversy. I was so relieved to discover this movie is the good kind of awful - the type of movie that you can gleefully laugh at with a beer in hand for a solid night of drunken riffing.

There are at least a handful of surprises in this epic to prevent it from becoming another dreary display of clanging swords. Namely, the story sticks rather close to its source material of gods living among humans while still attempting to have fun with it. The god Horus is to take the throne of Egypt, but is overthrown at his coronation by the evil god Set, removing Horus’ eyes as a form of mercy. It’s now up to the plucky human slave Bek to restore Horus’ less-tyrannical rule and save his love interest from the underworld. Thus begins an adventurous buddy picture of a towering god warrior and a smart-mouthed human servant. Their quest takes them through lands of giant snakes, monstrous sphinxes and wise-cracking gods.

The key to Gods of Egypt is that it never takes itself too seriously considering the audience won’t either. It’s not exactly the most serious of tales with men turning into birds, a flaming Geoffrey Rush having nightly battles in the cosmos and a giant CGI sphinx that utters “oh, bother” when his riddle is solved. The attempts at humor are rather lame, but lame in the sense of a grandpa trying to crack some jokes - it’s a picture that means well. There’s almost a sweet nature in how classically adventurous this giant epic wants to be with such ridiculous one-liners and simple characters. There were moments where I was rooting for this movie to win me over with its charms.

But two key components prevent Gods of Egypt from being the action-packed romp director Alex Proyas was aiming towards. The first is the special effect. While the visuals have a massive budget behind them, they are stretched too far with large sets, towering creatures and transformation sequences that appears rather cheap. Secondly, the fight scenes are monotonous. All of these grand gods appear with great power and yet every encounter seems to end with a trade of swords and fists. With such wild sights of Horus changing himself into a metallic bird and Ra battling shadows beasts with his immense powers, sword fights and fistfights appear as lame cop outs even when set against gorgeous settings. And these fights go on and on and on to the point where even the most forgiving of action fans will find themselves pining for something more.

Judging by the $100+ million budget Lionsgate sank into this picture, it seems as though they wanted this to be their next big franchise in the vain of The Hunger Games. Credit should be given for them not seeking the same old tone with something a little more fun and colorful than a dreary copycat picture, but that’s about the only major positive. Gods of Egypt comes very close to reaching a level of absurdity so high that it could be enjoyable, but lost me as the movie went on with the budget and ideas dwindling.