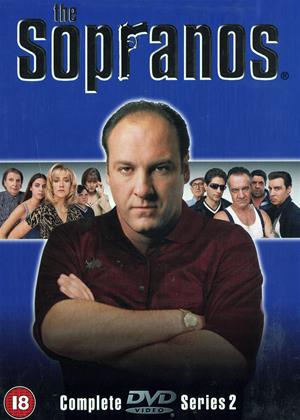 Reviews (1) of The Sopranos: Series 2

When 'The Sopranos' was first shown on TV I only saw a couple of episodes but have caught up and recently watched Season 1 - and liked it so much that I've just watched Season 2.

And to repeat what I thought about Season 1: this is really great, compelling TV - tinged with some sadness by knowing that lead actor James Gandolfini died recently. From the opening sequence of scenes along the New Jersey Turnpike and the soundtrack music of Alabama 3's 'Woke Up This Morning', the somewhat bizarre scenario of an Italian-American mobster (Tony Soprano, played by James Gandolfini) visiting a psychiatrist to resolve his problems, the focus on Tony's friends / associates and his family rather than crimes and criminal investigation, this is a drama that turns the usual cop-focussed TV series on its head. And it works very well.

In fact, Season 2 perhaps works better than Season 1 - the characters seem to have settled and grown into their roles and the story seems to flow better. Although the scenes in the psychiatrist's office continue they don't dominate the episodes and there is even the novel idea of the psychiatrist herself being so disturbed by the sessions with a known mobster that she herself has counselling - and her psychiatrist is played by renowned director Peter Bogdanovich!

The acting is uniformly excellent but the standout roles are those of Tony Soprano (James Gandolfini) and his monster of a mother, Livia (Nancy Marchand). The storyline flows well and seems consistent - providing you don't analyse it too deeply - and is so well told that it's like a good book, difficult to put down. Be aware that there is constant f-ing and blinding and much casual violence - as perhaps you should expect in a realistic (?) depiction of the Italian-American gangster fraternity.

The ending wasn't as rushed as Season 1, but did include semi-boyish jokes about the after effects of a bad chicken vindaloo and dream sequences in which I recognised the boardwalk at Asbury Park, Madame Marie's and the grinning figure of Tillie on the Palace Amusements building... There was of course a much more serious side to the finale as 'Big Pussy' Bonpensiero (Vincent Pastore) gets his come-uppance for being an FBI informer.

There are 13 episodes in Season 2, nominally 1 hour each - that's an awful lot of TV, but I watched it in 3 sittings, so compelling is it. Excellent, compelling viewing. 5/5 stars.