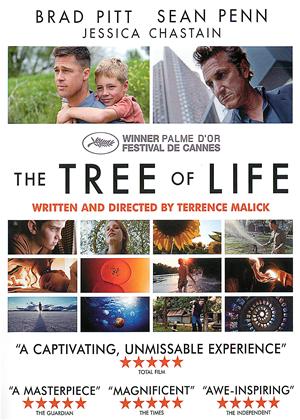 Reviews (5) of The Tree of Life

Flashed out - The Tree of Life review by JD

Starts at the end flashes back and dots about until you are not sure when you are. The very slow diary type recounting of a life then starts. Flashes of this and that. It becomes a chore to wait for the child to grow up because the bits don't hold that much interest on their own. There is then an arty beach sequence which is utterly tedious. The end.

Cripplingly Boring - The Tree of Life review by Alphaville

Director Terence Malick began his career brilliantly with Badlands then swapped filmmaking for navel-gazing. Watching this is like being forced to sit through a stranger’s home movie. It would be unbearable even on fast-forward. What happens? Good question. Mostly a boring couple and their two boring kids wander around boringly to a soundtrack of orchestra and heavenly choir. Oh dear.

If you want beautiful scenes with a classical music soundtrack and a film with lots of whispering saying poignant things and only 6-8 actual spoken lines, this is the film for you. I can’t really figure out what going back to the creation of the universe and dinosaurs had to do with the film but maybe this film is too complex and deep for, well, anyone. Do not waste your time.

The Tree of Life review by Alyse Garner - Cinema Paradiso

Winner of the Cannes 2011 Palme d’Or The Tree of Life is a strangely non-linear film that aims to query the meaning of life through the childhood memories of a Texan, Jack O’Brian – played as an adult by Sean Penn and by various others throughout his youth - growing up in a grief stricken family in 1950’s American South.

The film is interspersed with surreal images of the various stages of the development of life on Earth, from creation through dinosaurs and eventually settling upon the O’Brian family as they attempt to come to terms with the loss of a son and brother. Throughout the film deep and meaningful questions are voiced, by both Jack, in several stages of his life, and the rest of his family, all the while centring around the growth of a tree that Jack has seen planted.

The film is slow and not easy to watch; as there is little narrative plot to follow, in many ways the film seems little more than a series of erratic events. Having said this it is still intensely emotive and the depth of the questions posed is matched only by the grace and strength of Terrance Mallick’s film-making. The Tree of Life is interesting and thought-provoking and beautiful in an artistic sense, yet it is not a film you will find yourself aching to watch again. It deserves very high praise as a piece of philosophical art, yet as a piece of entertainment it is lacking in engagement. For many this will be one of those films you feel you “should” see, rather than one you will want to.