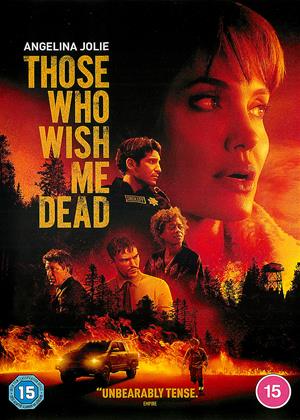 Rent other films like Those Who Wish Me Dead

Reviews (2) of Those Who Wish Me Dead

Not hot enough - Those Who Wish Me Dead review by AER

I think Angelina Jolie made somebody a promise back in 1998 that she'd make their movie as this is a real throwback to the type of thrillers that used to come out every week. With a well-established plot that throws in a few very light variations on the road to predictability, nobody is going to remember this film and that's a shame. Scripted and directed by Taylor Sheridan who made 'Wind River', and wrote 'Sicario' and 'To Hell and High Water' this is a comparatively weak brew. Everybody acts well, but the script is old hat, full of plot holes and just serves to remind you that they don't make films quite as corny as this anymore. Aiden Gillen and Nicholas Hoult's hitmen were the most interesting characters, yet nobody here is developed all that well beyond the lightest of sketches. If you are hankering for 90s films starring Val Kilmer, Sandra Bullock or Denzel Washington in the lead roles, then 'Those Who Wish Me Dead' is an old school treat. Otherwise, this failed to turn up the heat.

Exciting action thriller - Those Who Wish Me Dead review by Alphaville

Writer/director Taylor Sheridan (Sicario, Hell or High Water, Wind River) has previously had problems keeping a story going, but his best film yet grows into an action-packed thriller that will keep you hooked. Unlike most action movies, the good guys have emotional depth and the bad guys are not just ruthless but so relentless and resourceful that you might even end up rooting for them!

What could have been a silly story about a smokejumper (Angelina Jolie) and a boy on the run from gunmen in the forests of the Rocky Mountains becomes something more involving. Add an encroaching forest fire and you have plenty of opportunities for tension, excitement and some scenes that are even quite moving.

It’s a film that’s never going to win awards but, as Angelina says on the Making Of featurette, it’s got both grit and soul and revels in all the excitement you want in an action thriller.

Those Who Wish Me Dead review by Mark McPherson - Cinema Paradiso

There are two elements of Those Who Wish Me Dead that stuck out to me immediately. One of the supporting characters is a pregnant woman who encounters gun-toting bad guys. She not only fights back with a hunting rifle but then pursues them on horseback. I can’t honestly say I’ve seen a film where a pregnant woman rides a horse while wielding a hunting rifle. Almost everything else, however, is a pretty standard thriller with all gritty bells and whistles of the genre.

The premise is at least a pleasing one that promises some intensity. Angelina Jolie plays Hannah Faber, a veteran smokejumper that has now been reassigned to a fire watchtower. She’s still haunted by the past as with one forest fire where she watched a co-worker burn and family trapped in smoke. Her mind keeps racing back to such a tragedy, repeating throughout the entire first act just in case the opening sequence wasn’t enough to convince you. The rest of her time is spent throwing back enough beers and pulling enough wild stunts to be considered one of the boys in her close community of smokejumpers and survivalists.

Meanwhile, the school-aged Connor is finding himself going on the run with his father. His dad is an accountant but his findings have led to him uncovering some dirty deals and making him the target of hitmen. We don’t know much about the hitmen or what truth they’re trying to keep quiet by silencing Connor’s father. All we know is that it’s a father-son duo played by a cold-hearted Aidan Gillen and the stone-faced Nicholas Holt. They kill anybody who gets in their way and plans to hunt down Connor when he flees from the scene. On the run, Connor tearfully seeks the help of Hannah, aiming to make sure Connor’s dad didn’t die in vain.

These characters all fall into pretty typical thriller roles. Jolie plays up her role with a mix of heartfelt sensitivity and wry humor. Connor operates on a similar level but is more just a cipher of innocence. Then there’s Gillen operating with great hated for the Montana landscape he scales and Holt putting on the look of someone who will have a character arc but not really.

The two wild cards to such a story are Jon Bernthal and Medina Senghore playing a married couple living in the woods. Bernthal’s character is the local Sheriff and Seghore is his pregnant wife. As no strangers to survival training on the land, both of them become players in this plot and act as though this isn’t their first rodeo of gunmen invading their hometown. Both of them get some pretty stellar moments when they get the drop on the gunmen and there’s enough spirit and love to their romance that they become characters you want to root for towards the end.

This isn’t to say the journey of Hannah and Connor as they search for help isn’t intense or exciting. The climax promised of a chase and fight amid a burning forest is a visually pleasing sight, especially for the brutal showdown between Jolie and Holt, a battle of guns, knives, and hatchets. There’s nothing all that compelling in the dialogue or even the moral motivations of the characters. But in terms of being a bruised-arm type of action movie, where Jolie becomes a battered and burned mess by the time the credits roll, it gets the job done rather well.

Those Who Wish Me Dead is what may be considered a light bit of thriller joy considering it won’t be as well remembered for being little more than the forest fire thriller. There are some intense stand-offs, exciting action, humanity in the combat, and home-cooked warmth present for the gorgeous Montana location. But just like the bad guy’s catchphrase (“I hate this place”), it won’t last long in the memory past the brief thrills it’ll stir for its relatively short time.