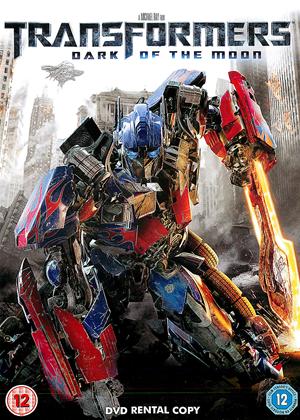 Rent other films like Transformers: Dark of the Moon

Reviews of Transformers: Dark of the Moon

Transformers: Dark of the Moon (aka Transformers 3) review by Melissa Orcine - Cinema Paradiso

Director Michael Bay learned from the School of Ka-Boom with a Masters in Crash and Burn. He took a course on film making on how to write a succinct script but dropped out. In short:Michael Bay loves to blow stuff up, haven’t you noticed? In the threequel ‘Transformers 3: Dark of the Moon’,Michael Bay peaks at the Summit of Explosions and with a little help from the Autobots and Decepticons, he’s done it in 3-D this time.

Shia LaBeouf reprises his role as Sam Witwicky, an unwitting accomplice in saving the world from robot apocalypse. He’s done it twice in the previous films with then on-screen girlfriend Megan Fox, but after the dissing Fox unleashed on Michael Bay, going as far as comparing him to Hitler on a film set, she was sacked and replaced by Victoria’s Secret supermodel Rosie Huntington-Whiteley.

In ‘Transformers 3: Dark of the Moon’, Sam and Carly become entangled with each other and in the conspiracy involving giant robots that originated all the way from the 1960s. ‘Transformers 3’ has a premise, would you believe it, and it seems that the space race between the US and Russia back then was really a race to learn what type of UFO crashed on the Moon. USA got there first and they discover Sentinel Prime (voiced by Mr. Spock himself – Leonard Nimoy) in the ruins.

The coherence stops there. There’s a premise, a good one at that, but Michael Bay is not about to give you plot. He’s being consistent here, let’s give him that. But the CGI robots, fight sequences, and blowups? This is the type of movie you should view on 3-D and if you’re just into the eye candy of its Visual FX and Rosie Huntington-Whiteley, your money is not wasted. Unfortunately, it can also get tedious seeing the same thing over and over, to the point that the robots are hard to distinguish – who are the good and bad guys again? Here comes another city blown to smithereens, god I’m zonking out fast!