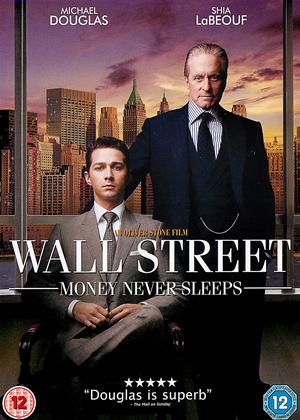 Well how do you add to a classic from the 80's? You don't is the answer. This film blows. It has such a simple premis and still falls short of the mark.

Oliver Stone put his name to this and I feel sure he is now regretting that as it makes it look like he is trying to just turn a fast buck.

As the studios are not risking any money on anything but remakes and sequels you would think that they would be a little more carefull with the small amount of money they are shelling out (in comparison with previous years).

I have to agree with the cover, Douglas is superb but even he cant save this lemon. LaBeoufs character is thin at best and the acting is in the, as Joey from "Friends" would say, "smell the fart" acting school. Supposedly moody looks and an attitude (probably wrongly aquired from his success in Transformers [a kiddy flick]) do not make up for real acting skill.

Don't waste your life watching this.

In 1987’s ‘Wall Street’, Gordon Gekko (Michael Douglas) declares ‘Greed is good’. His then apprentice was a young, wide-eyed Bud Fox (Charlie Sheen) and they were king and prince of the banking world, respectively… until Gordon crashed and burned. In the sequel, 2010’s ‘Wall Street: Money Never Sleeps’, Gordon is released from prison having been indicted of in-trading. He has no money and no respect from the people he swindled. His infamy is well-acknowledged but he’s Gordon Gekko and like a snake, you wouldn’t know when he’ll strike.

Then there’s a young trader, Jake Moore (Shia LaBeouf), who’s just hit a snag in his earth-friendly investment. His mentor Louis Zabel has just been crushed by its competitor, Bretton James (Josh Brolin). But with a steely determination, Jake works for Bretton. He seeks the help of Gordon so he has a change to earn big, exact revenge for his mentor, and even reunite Gordon with his estranged daughter, Winnie. That is, if Gordon and Jake can pull it off.

Fine performances are delivered by all: Michael Douglas does not miss a beat as Gordon Gekko. Though unapologetic and conniving as before, he grows a heart especially in want of reconnecting with his daughter. Shia LaBeouf is unafraid to go toe to toe with Douglas. Frank Langella, Josh Brolin, and Carey Mulligan make much more than a dent with their screen time.

Directed by Oliver Stone, ‘Wall Street: Money Never Sleeps’ seems like a complicated fairy tale of money espionage. In the 80’s it was sensational; traders wore dapper suits, fast-talked, and made millions however dirty they played. But these days, cable channels air programs and flash tickers at the fringes of the TV for stock market information. The enigma of that world is gone, so too is the religion of greed. The sequel makes no excuses for greed –not money—being the root of all evil. We still have Gordon Gekko evangelizing to Jake to sell his soul to the devil, but the immediate consequences are dire. Succumb to it and lose everything you love the most.