Rent A Pigeon Sat on a Branch Reflecting on Existence (2014) 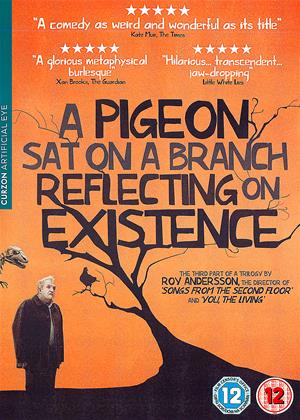 I am not a fan of abstract cinema. Not even Monty Python, so I would not normally do a review for this film. However, given the comments in the previous review, bearing in mind that the director was making a political statement I would like to suggest that the use of English (a second language many Swedes understand) to suggest "them and us" in a film made in 2014 after the previous 5+ years of Sweden's relationship with the English speaking world need not be taking as a personal insult.

I do not expect the British media to remind the British of some less glorious moments in British history but that should not be an excuse for forgetting and rewriting history. Therefore, we should allow other nations to deploy the same stance of:-" that is what "THEY" do. "WE" would never do that". As indeed most people would not ..... unless, perhaps, ordered to do so by "THEM" .

The scenes portraying the actions of the Swedish King are not flattering and they precede the scene referred to. I am sure everyone already holds their own personal opinions as to the ethics behind the actions of the people leading certain corporations and armies.

This film won't be everyone's cup of tea. It's slow-moving and fundamentally pointless, which is what you'd expect from absurdist cinema. But for all that I was quite enjoying the short, interlinked scenes, the two salesmen slightly reminiscent of Little Britain's Andy and Lou.

But towards the end of the film I was shocked and sickened by a scene quite out of context with the others. This showed a group of British colonial soldiers whipping and herding African tribespeople into a large brass cylinder, then lighting a fire underneath it. Unlike the rest of the film, the dialogue was in English.

Apparently this was a message about a Swedish company that had, apparently, caused the poisoning of hundreds of people in Chile. The message was lost on me and I was disgusted that the Swedish film-makers chose to depict the soldiers as British instead of Swedish. This sort of thing is expected from Hollywood (such as the church-burning in The Patriot) but to see it coming from Sweden - a country with a pretty shameful wartime history in the 20th century - is intolerable.

The title of this movie is the only intresting or amusing thing about this movie. After watching the movie it's quite clear that this title could be applied to any movie and would equally apply.

Avoid unless fan of directors work.

Although I enjoyed his earlier film in this set, songs from the second floor, there was something more humorous about it. This one was Beckett at his bleakest: way too down for me and I came away feeling a bit dismal. Not sure there were enough ideas to sustain a full length film - a hint of re-editing outtakes from the previous films?

I am sure you can find something better

give it a try, you never know... - A Pigeon Sat on a Branch Reflecting on Existence review by DF

Having read the 'general info' and the 4 reviews here, I approached this movie movie with trepidation but with some curiosity. For me, it could be one of those movies that succumb to the 'eject' button after ten minutes or, on the other hand, carry me along for the duration. Anyway I did enjoy this movie, although 'enjoy' is perhaps not the right word. A well known quotation came to mind; life is a tragedy for those who feel and a comedy for those who think. When I did laugh, why was I laughing? Yes, it could have an absurd 'tag' on it, but comparing it to Little Britain or Monty Python IS absurd. The movie travels with its episodes into deeper reflections on human beings the societies and circumstances in which we exist. The various characters all, had to me, a very recognisable reality and truth, even in some of the rather surreal situations. Andersson is very much in the same room as Beckett. Andersson has allowed himself to make some political metaphors, so what? It's his movie. In its 'visual' element, I found the movie extraordinary; the fixed camera, the lines of perspective and space, the lighting, which allowed no shadows. Okay, it'll have been said before; not everyone's cup of tea, but give it a try, you never know...

Another wearing effort from 'master Swedish director' Roy Andersson. A grim, absurdist, dry-as-dust comedy that is no more than series of formal, stilted, TV-like sketches filmed as single shots with a static camera. This does not constitute cinema. It is unlikely to hold the attention.

funny in parts, quirky and, if you had never seen Tony Hancock, Monty python or Michael Bentine, or countless French, Spanish or Italian surrealist, existential sketches, then you would be impressed.

as it is, it is passé, slow, derivative, dull and ultimately boring.

I wonder what kind of critic could be impressed by this?