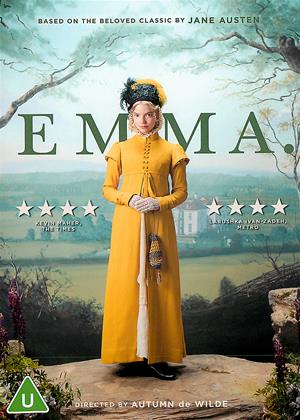 This is a really good adaptation of Emma. The cast are spot on and really enjoyed Anya Taylor-Joy in the lead role. The story is fairly standard period drama tale but due to some bits of humour and decent acting makes it an enjoyable film.

The book need not concern viewers. The film holds up in its own right. An intelligent study of mixed messages, love confusion set against a period background of social rules that the story gently sends up. Performances are excellent and one stand out aspect is the costumery. Women will particularly enjoy the clothes, Emma herself is in a new outfit each scene and the effect is very attractive and pretty as is Anya Taylor-Joy in the title role. Also, watch out for Letty Thomas and Miranda Hart in fine supporting roles which in some ways are more demanding than the lead character.

Did we Need Another Emma? - Emma review by AA

Interesting adaption of the classic novel, and as good as the acting was the condensing of the book into a two hour film, meant that some of the subtle aspects of the original book have to be overlooked or expunged.

This version of Emma is the best I have seen as it shows the humour of Jane Austin as I interpreted it in the novel. The acting is first class as is the way the film is shot. No one looks odd in their costumes and I actually forgot it was a costume drama (I usually hate them) as I was so engrossed in the film.

A very stylish and visually stunning production however it seemed to concentrate more on the visuals to the detriment of the plot. Fine if you like looking at stunning costumes; rather boring if you're interested in the full story. A much better production is the 2009 BBC version with Romola Garaic and Jonny Lee Miller.

Perfect - Emma review by BE

Beautifully crafted, well acted and with sumptuous scenery and locations. Who would have thought that those Regency dances could portray such sensuality?  A wonderful movie and such a lovely change from sex,  foul language and uncouth characters that are the mainstay of a lot of today’s presentations.  Very well done Autumn de Wilde.

A new entrant but a poor one - Emma review by JM

There are many productions of Emma, but I'd say this was far from the best. The treatment is trite, the acting shallow. This might be an attempt make a complex story more palatable to a wider audience, and that is a worthy aim, but if I hadn't known the story so well, it surely wouldn't have made much sense.

The central character is played by an actress who subscribes to the modern mumbling school of acting - her enuciation is dreadful and about 25% of her speech is lost. Johnny Flynn is quite ill equipped to take on the rather sober and restrained Mr Knightley, looking more of a rakish rockstar than the character needed to anchor Emma's flighty nature. There is a notable absence of chemistry between the two - which might be forgiveable if intended to put one "off the scent" - if it weren't for the fact that in the denoument there is no sense of tension, climax or emotional release.

On the positive side, the music is excellent as is the photography. Bill Nighy makes a passable Mr Woodhouse (not irrascible enough for me) and Mia Goth is a good Harriet Smith. Most actors at least have the benefit of decent diction, whilst Anya Taylor-Joy's Emma (as mentioned) lets the side down badly with her gabbling too fast. The properties, landscape and costumes are all beautiful and well photographed.

There are many version of Emma, but this will not become a classic. People will pick their own "best" version, but the 2009 one with Romolo Garai made for the BBC (available from cinema Paradiso) would take some beating for a benchmark.

Quirky & stylised interpretation of Emma with more teeth than others; not for the twee Austenites - Emma review by tm

a colourful, eccentric and meticulous adaptation which may have got closer to the sharp irony that Austen wanted us to feel, in a meticulously observed and if (for some) over stylised telling which i found funny, sharp and engrossing.

i loved it. Personally i think it is one of the best and perhaps the most original filmings of an Austen book, ever.

Each to their own, but, we thoroughly disliked this film and turned it off after 30 minutes, maybe it improved, I doubt it and really don't care. I appreciate that the story is intended to amuse and ridicule the social mores of the period but that does not excuse the lightweight style of this film, more to the point the soundtrack is loud, intrusive and totally inappropriate: Worse than a B movie.

Austen Jim, but not as we know it - Emma review by SE

Enjoyable film with a recognisable plot and characters but without the subtleties of Austen herself.