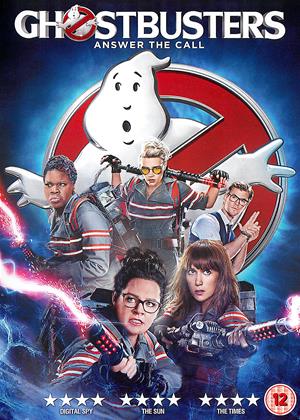 That movie didn't make me laugh at all. It's sad for a comedy. The best actors in this film are those from the original movie, they demonstrate they can act, even for just 30 seconds. The main actors can't. The casting is just wrong. The story is more or less taken from the original movie: no surprise or suspense there. It's just a terrible movie.

This is a weak pc metoo version of a classic 80s comedy movie. Hollywood keeps doing this now - remaking old movies with all women casts. The results are usually awful and they all flop.

To be fair, this starts relatively well - I enjoyed the first act.

After that, it went rapidly downhill, with silly CGI overload scenes, loads of girly silliness, loads of stereotyped moron and/or baddie men. I almost turned off but decided to yawn it out.

I just hope Hollywood stops pandering to angry MeToo feminists and remaking all old movies as preachy feminist statements with all-female casts. What next - an all-female Lawrence of Arabia? A man-free Saving Private Ryan with silly Hollywood identikit actresses in pink uniforms defeating the nasty-wasty men AKA nazis? STOP IT. Just STOP IT. End the diversity-worshipping, the box-ticking casting and the preachy polemic and lectures. And the BBC should stop it too (looking at you Dr Who are almost every other UK TV drama).

Lots of names getting free money - Ghostbusters 3 review by NC

Ozzy, Garcia, Weaver, Bill Murray etc all doing as little as poss for max wages. Nowhere near the originality of the original 84 film. I mean Nowhere near. American for sure, but not in a good way. Just cloned lots of detail from the original and popped bits in among the banter.Hopefully will lose a lot of money and the film moguls learn another lesson.

It's fine, better than most remakes - Ghostbusters 3 review by Christopher Chiu-Tabet

To the surprise of no one who saw Bridesmaids, The Heat and Spy, it’s an enjoyable if sometimes scrappy film populated by talented comic actresses whom you’ll definitely want to spend more time with as the credits roll. Leslie Jones was particularly enjoyable, probably because the character she played would have been relegated to bit player in any other blockbuster. (Contrastively, Chris Hemsworth’s secretary is far too dumb to be believable.) The climax is at least far more spectacular and emotional than the original, instilling a sense of jeopardy it could not, and even including a nod to Dan Akroyd’s unproduced Hellbent script. There’s definitely one area the new Ghostbusters trumps the original; like Ghostbusters II, the villain (played by Neil Casey) is far more creepy than Zuul.

I havent had less fun since the last time I had root canal surgery. You should avoid this movie like a healthy dose of the clap, COVID, leprosy and ebola combined. Zero laughs, zero interest, just nearly two hours of resisting the urge to put your foot through the TV and the injustice of this film even being given the coveted and time-honoured title of 'Ghostbusters'.

I would have enjoyed this film so much more if I had never seen the 1980's originals. With this in mind the storyline is just simply too repetitive.

The saving grace is that the acting is great, funny and engaging.

Watch it again in 12 months? No, glad I've seen it but one viewing is plenty.

Not a good remake , not funny and found it really hard to finish watching it all. Yes better special effects than the original films , but that's about it .

Absolutely awful Feminist Remake , not funny at all! - Ghostbusters 3 review by CS

What the exact purpose was of taking the original cast and making it all female, is beyond comprehension, except to appeal to a bunch of nasty sexist feminists! Casting Chris Hemsworth as the dopey dumb blonde Secretary is just plain sexist, especial;y when on the original films she had dark hair and was very intelligent! This just goes to show that the makers of this film don't appear to have any understanding as to the original purpose of the films, but also this film is not funny in any shape or form! I personally do not find Melissa McCarthy funny, having a loud AmericanMouth and being Large is not funny, it's just grass. And the show cast come across as a bunch of Lesbian Feminists bent upon belittling men as much as they can! An awful film and very hypocritical too!

The long-awaited return of Ghostbusters to the big screen came on a winding and rocky road of trouble. For years, Dan Aykroyd and Bill Murray fought each other on how the franchise would proceed. As things started to solidify at Sony, the prospect of an all-female Ghostbusters became a reality when female-friendly director Paul Feig was brought on as the director. Rumors of production problems, a legion of men hateful with the all-female decision and one of the lowest rated trailers ever on YouTube gained the movie plenty of attention. Trolls wanted the movie to fail for tainting the franchise and feminists declared it their last hope of making women relevant at the cinema. Such emotions are unwarranted for a movie such as this. At the end of the day, it’s just another lukewarm blockbuster take on a franchise, no different than the reimaginings of Robocop or The Thing.

I came into the movie mildly hopeful. Paul Feig has risen as one of the top comedic directors of this decade for critical and bankable successes on female comedy. From a numbers standpoint, Sony made the safe call. Feig assembles his troupe with notable female talent to fulfill the Ghostbuster roles in this reboot. Kristen Wiig plays the nervous and awkward professor. Kate McKinnon plays an oddball of a mad scientist. Leslie Jones plays the street-smart everywoman to keep these science geeks grounded. And Melissa McCarthy is playing...well, Melissa McCarthy. Usually she can do characters, but Feig doesn’t give her much to work with this time. And in case Feig hasn’t made it clear that women are the dominant and smart protagonists of this picture, their idiot secretary is played by Chris Hemsworth looking blonde and acting dumb. And by dumb, I mean cartoonishly dumb to the point where he’d be more at home with Beavis & Butt-head.

For the first act, there is some decent setup and chemistry between these four in how they slowly come together to form the Ghostbusters. But that enjoyment slowly begins to drift apart almost as much as the teamwork. In an attempt to make all these actors shine, the script continuously mounts one-liners on top of another with very little back-and-forth between the stars. They almost appear to have built up walls around them where they can only deliver their funny lines alone. This becomes apparent the way McCarthy and Wiig begin to lose interest in their roles and the way McKinnon tries too hard to be random and funny. Leslie Jones stands out slightly from the rest, but is soon relegated to screaming and ranting as much as her co-stars.

Either they’re relying too much on the script to make them funny or the writers were hoping the actors could punch up the comedy of uninspired gags. This is one of the most depressing aspects of the picture in that what made the 1984 Ghostbusters such a hit was the ease of comedy between the foursome. With this new cast, everything just felt so artificial about their roles.

Okay, so the movie can’t quite give me that same sense of perfected characters. Can it at least give me a story worth following? As with the previous Ghostbusters movies, the plot is not that impressive. This time it’s even less engaging the way the Ghostbusters have to stop some ghost/demon/nerd from unleashing an army of ghosts on New York City. It’s never revealed very much who this guy is or what are his true motivations for unleashing ghosts. It’s mentioned in passing that he’s seeking some sort of revenge for being bullied, but it’s never fully explained. The villain just sits in a corner until the third act which turns into little more than a typical CGI lightshow.

But what about the Ghostbusting? Isn’t that cool? In the original Ghostbusters, busting the ghosts came in small, but unique sequences. This new movie is overkill. The female Ghostbusters spend far more time testing new weapons than studying their enemy. They have ghost grenades, ghost vacuums, ghost pistols and ghosts shotguns. But, wait, ghost shotguns? Weren’t the Ghostbusters supposed to wrangle ghosts with proton beams and then trap them in a containment unit? Not anymore. Apparently you can just shoot a ghost or slam a ghost into another ghost or literally stab them with a regular knife and they’ll disappear from our plain of existence. Look, I know the idea of science being used to combat ghosts is silly, but this movie could at least TRY to have some logic. Random scenes of Kate McKinnon turning into a John Wick style gunfighter of ghosts holds no tension when you can’t even figure out the rules of ghost hunting.

If you find it irksome that I keep comparing this movie to the 1984 original, you can blame this new version for that. The movie constantly beats the viewer over the head with cameos of all the original cast from Bill Murray to Slimer. The cameos, winks and tributes becomes so tiresome that I wanted to shout at the screen to have some faith in its own imagining of Ghostbusters. This must be what the fans wanted as they were gobbling this fanservice up as much as they were Ecto Cooler. Having been over nostalgia for years, this Ghostbusters that relies on the past did nothing for me. Yes, I saw Ghostbusters, too, but I need a little more than random cameos to be invested in its return.

For all the hoopla Ghostbusters whipped up online, it all came down to just being another depressing slap of the Hollywood blockbuster machine, milking another property into the mildest of remakes/reboots. Nothing revolutionary, nothing terrible. Just let it die (or trap its spirit) so that Feig can go back to directing original R-rated comedies, McCarthy can be naturally funny again and Ghostbusters can be remembered more as a great movie from 1984 than a runaway franchise meant to sell Twinkies.