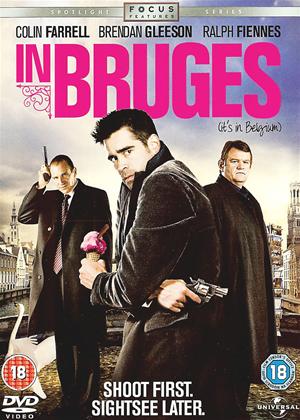 Charming, dark and satirical - In Bruges review by CP Customer

The first comment I must make about this film is how much I enjoyed watching Collin Farrell on the screen. Before now I have had little respect for him as an actor, however in this film Collin Farrell delivers a great performance with excellent comic timing and some serious and dark moments as well.

The plot begins slowly, with two men hiding out in Bruges after a botched job, initially the plot centres around the relationship between the two gangsters Ray (Collin Farrell) and Ken (Brendan Gleeson). The chemistry between the two actors is essential to the plot, and Farrell and Gleeson do not disappoint. Their witty banter is funny and their characters are well developed with meaning and depth, they are not just stereotypical gangsters. The plot takes an interesting turn with the introduction of new characters, of who play an essential part in the climax. It is a perfect blend if dark humour and drama to make a very entertaining and well put together film. Some may comment on the slow pace of it, however, this in my opinion adds to the character of the town of Bruges. It is a bit of a marmite film and if you are after a fast paced Hollywood blockbuster this definitely is not for you, however it kept me laughing whilst on the edge of my seat.

In Bruges comes as a real surprise and allows Colin Farrell to show he is actually an actor beyond the poster boy image. Here he plays a rookie hitman, a bumbling idiot that wouldn't look out of place in Father Ted and one that is suffering from a confidence crisis. He is forced to lay low in Bruge with his experienced colleague (played by the excellent Gleeson), while awaiting instructions from their vicious boss, Harry, after a hit goes wrong.

The location may not appeal to the young hitman, but their time on ice provides the opportunity to act as tourists and explore the nightlife the city offers. The past soon catches up with the duo, but at all times they maintain a strong bond. Bruge is well presented, and looks a great place to visit even with the local crime and comical locals. As expected the two killers do not hold back on the dialogue, which accounts for the age rating. I'm never a fan of that C-word which is often used throughout the tale but it didn't interfere with my enjoyment and real surprise of seeing In Bruges. Highly recommended.

A little Gem!! - In Bruges review by CP Customer

Great film! Funniest i have seen in a long time!Don't usually like Colin Farrell but he is terrific in this,probably due to the fact he has a good script and is using his natural accent! The dialogue and oddball characters, all add up to make a first rate film.Just shows you don't need Hollywood money to make good films.A winner for the low budget/small film maker,Brilliant!!

A bit blah - In Bruges review by CP Customer

I’m not sure if the humour in this film out weighs the slowness of the action. Colin Farrell is disturbingly like 'Dougal' from Father Ted, and the film mostly seems to promote/ or not promote depending on your point of view - Bruges as a City. If this was a TV drama- which doesn’t seem improbable, I think I probably would have turned it off! O.K if you like slow moving

Something a bit different... - In Bruges review by CP Customer

This is a really fresh, nicely-crafted film. Interesting story, brilliant script, great actors having fun with their characters, and plenty of laughs (from some rather dark places) along the way. It's all set amongst the beautifully austere and fairytale-like setting of Bruges. It's about crooks, hitmen and other strange characters in the dark corners of society. It builds towards a confrontational ending. And it really delivers. Check it out if you're bored with the usual guff that always seems to let you down. It's a lot of fun.

Different but Great - In Bruges review by CP Customer

Not what I was expecting.

There is lots of swearing (so be warned!!) but it is great film and worth watching. Funny and sad all at the same time. I laughed lots and heartily!!

Pulp Fiction without the wit - In Bruges review by CP Customer

Sorry, yes it was well filmed, the acting was good and Bruges is a delightful and original backdrop, but to me it seemed rather a predictable immitation of a Tarrantino movie, with a bit of love interest to stop the gangsterism getting monotonous.

Dark, funny, good acting and I didn't find the pace of the film too slow! I have seen a play by Martin McDonagh and it too was dark, well written and well acted.

Tarantinoesque - In Bruges review by DB

It's a bloody black comedy and it's quite funny but at the same time it's poigniant. I enjoyed it but it's not the sort of film that I usually watch. However I can recommend it to Tarantino fans. It's well shot and a good script, nicely put together.

Never like this in belgium - In Bruges review by CP Customer

well acted but surpringsly slow plot which left me drinking coffee to keep awake. had looked forward to seeing it but left me disappointed.

A lost opportunity. - In Bruges review by CP Customer

Colin Farrell, whom I dislike as an actor and person, plays his part well and Brendan Gleeson never puts in a poor performance. Ralph Fiennes attempting to do a Ben Kingsley (as psychopath Don Logan in Sexy Beast) fails to work. However the swearing is over-used (I agree a good cuss in the right spot adds to a scene) and there is absolutely no need for the 'c' word - I was going to switch off at that point but was out-voted. Good scriptwriters don't need to rely on swearing.

Apart from Gleeson, there is a good performance from Jordan Prentice as the dwarf extra in a make-believe film shoot.

Overall, and swearing aside, an entertaining film that should have been really good but just misses the mark on occasions.

2 out of 7 members found this review helpful.
Show more