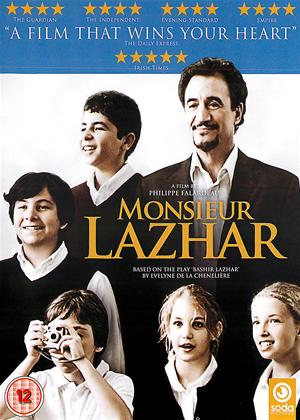 Sorrowful, endearing, meaningful, emotional and strikingly true and real. But with some charming upbeat moments too. I enjoyed it overall and would recommend for a sweet and soulful night in x

A Category 12 family film at the very highest level: even the sub-titles are family-friendly! - Monsieur Lazhar review by DW

"Brilliant" is an understatement: watching alone, I was transfixed so I imagined the pleasure for a family-film-night involving grandparents, their children & their children's children. There's something for everyone is this lovely on-location film. The classroom scenes are slow & drawn-out with effective silences: other scenes are very much faster & shorter though significantly relevant to the central themes.

I saw the true-to-life story as a relative lull between two storms: a far-reaching tragedy preceded the film whilst the ending pointed towards more incoming storm clouds. It's another World Cinema film that has a make-your-own-mind-up type of ending that invariably sets me thinking. In my imaginary 3-generation family mentioned above, I bet each person would have their own idea of what happened next.

Call me cynical if you like but if this came from money-grabbing Hollywood I reckon there'd be at least one sequel then possibly a prequel. As it is, it's a stand-alone gem & I'm glad I found it (or vice versa).

I loved this gentle film which ambles through a few weeks in the life of a primary school in Canada, exploring loss, anger, grief, prejudice, fear, the price of secrecy but ultimately comes settles on the power of human kindness.

Quebec Bakalva - I've had those before but didn't know they were called that. - Monsieur Lazhar review by DS

Placed in the wrong hands Monsieur Lazhar could easily have turned out to be a terrific treacly confection of heartstring-tugging manipulation. Considering what is on display, the themes, it is to the credit of the director, and screenplay writer Philippe Faraldeau it is not.

The tragic event that starts the story, whilst a bit unlikely, is not sugar-coated and from that, for me at least, fairly shocking opening all things grow. We are into adult themes here, that come crashing into the world of children, it is all about love, loss and the well-walked path ‘a stranger in a strange land’ but for a lovely change, you are not hit about the head with a baseball bat with these themes.

Without laying out the plot, and what happens and how the story concludes it is difficult to discuss what you see on the screen. It is best to say that we are treated to restrained naturalistic performances where possible and some of the least annoying child actors I have seen for quite some time. In particular, Sophie Nélisse was at the time clearly Canada’s child-Drew Barrymore. The adult actors also give great accounts in particular Mohamed Fellag who brings nuance and quiet air of dignity and sadness to Lazhar.

There is a real undercurrent of trauma throughout the story that runs through the lives of everyone adult and child alike but the real trick, the real heft of this well-crafted and acted story is that for a such a huge emotional hit in people’s lives there is no pay-off, no closure, you work your way around the roadblock, you try your best to make sense of it – sometimes it does not make sense. To my way of thinking this is a very adult way to show the audience a tough and emotive topic.

Plenty of comment throughout the story on the process of education in Canada, the restrictions of teaching methods, for good or bad, and how it can change a dynamic between teachers, pupils, and parents to such an extent where Lazhar’s simple observations on a child to her parents is immediately rebuked and he told to ‘teach not bring up’ but to the credit of the film it sides with no one, you make your own decisions. This is films strength it really does not try to push any agenda, Lazhar is a nice man, who is hiding more than one secret, not because he is an asylum seeking Algerian but because he is a nice man. The headteacher tells him how things must be done not because she is the ‘baddie’ (far from it) but because it is her job and that is how it must be done.

For me, this type of attitude to story with issues that can get people very emotive, as we know this is now a code-word for sweary and dementedly angry these days, was refreshing.

Based on a play by Evelyne de la Chenelière, who plays pupil Alice’s airline pilot mother, Monsieur Lazhar is simple tale, told subtly, on a topic that could have been mangled through the Call the Midwife sugar press. It was not.

Recommended unless you really hate asylum seekers and children.

Nuanced, dignified performance by Fellag, and Falardeau gets superb performances from the supporting cast including the children.

A Quebecois middle school is shocked to its core when one of its beloved teachers is found hanging on a pipe inside a classroom. The suicide is then made more disturbing because two of her students saw the teacher hanged and dead. It’s a quick reality check in the opening scene of Canada’s ‘Monsieur Lazhar’, but death eerily looms in this film from start to finish.

The titular ‘Monsieur Lazhar’ is played by Algerian actor Mohamed Fellag, popularly known by his name Fellag the comic actor in France. Here he takes a dramatic turn and he knows what he’s doing, being the genteel newcomer who applies for the teaching job left by the one who committed suicide. As Lazhar, Fellag manifests a man who is eager to connect with his students but has restraint on opening up since he isn’t exactly what he says he is. Is Lazhar telling the truth about his credentials? Why migrate from to Canada at all? Can he turn these kids around and erase the tragedy from their young minds?

Written and directed by Philippe Falardeu, ‘Monsieur Lazhar’ has joined the ranks of films where teachers inspire their students to be the better versions of themselves and follow their dreams. But the film is much more simplistic than that; it’s about teacher-student relationships and how it impacts both parties’ lives forever. For Lazhar, he wants the students not to obsess over death, while the students want the assurance that everything’s going to be okay – if this won’t come from their own parents, at least from their teacher, someone whom they spend most of their days with, anyway. And yet the drama in ‘Monsieur Lazhar’ is not melodramatic and hysterical. Instead, the drama is in the quiet that Lazhar and his students practice in order to move on, let go, and live. Fellag as Lazhar is perfect while the kids who play his students are nuanced and natural, not annoying actor-types at all.

‘Monsieur Lazhar’ tugs at the heartstrings and for good reason. No wonder it was nominated for a Best Foreign Film Oscar in 2011.