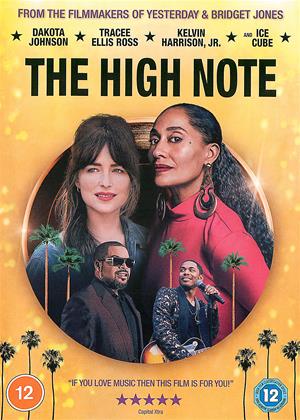 Reviews (4) of The High Note

Nice story.. some cracking beats.. love story AND Dakota... Worth a watch.. No violence.. Great "just keep at it" message.

I enjoyed this film a lot .The characters were all believable and the music and singing great .Its a good feel film eventually with a surprise at the end. JB

This was a nice movie. We googled Grace at the end to see if she had done her own singing. Discovered she is Diana Ross's daughter so yes she did sing! Very enjoyable, won't change the world but a feel good movie.

Not a very High Note - The High Note review by RR

I found this boring and underwhelming. Story of an assistant trying to make the grade. Really not worth the watch

The High Note attempts to bridge that troubling cap between an aspiring music intern and late-stage singer. Often the artist and the intern are at odds, especially when they’re of different ages and clearly different classes. Here is a film where two women of these roles meet and connect in a dramedy that manages to hit more beats than it misses for taking aim at the music industry.

Dakota Johnson plays the wide-eyed Maggie, eager to prove herself as the personal assistant to the aged celebrity Grace Davis (Tracee Ellis Ross). Maggie does a little bit of everything for Grace, stretching from getting her drinks to producing her music. Grace, however, is clearly in the twilight of her music career. She hasn’t recorded any new music in ten years and her manager Jack (Ice Cube) is hoping she’ll more or less retire to a residency at a club in Las Vegas. But Grace doesn’t feel that she’s over the hill quite yet, that there’s still music bubbling inside her just struggling to get out. Perhaps Maggie might be just what she needs to get her musical groove back.

Johnson and Ross shine particularly bright in this picture. Johnson was a lot of chipper enthusiasm and anxiety as an assistant who feels undervalued, later connecting with the musician David (Kelvin Harrison Jr.) as they bond over trivia. Clearly Maggie wants to be seen as more impressive and thus adopts a double life that becomes tricky to juggle with her other duties. Thankfully, the film doesn’t settle for this kind of comedy of errors despite how amusing it is watching a well-meaning Johnson scrambling around to show she is capable of more. Ross is by far the highlight the way she explodes onto the stage with music that is worthy enough to root for going for another album, even after multiple Greatest Hits and Live albums.

There’s plenty of expected building blocks to make this premise hold water as Maggie and Grace strive to be their best versions, proving that age is only a number and that passion never dies. There’s a sense of warmth to the conversations that never crosses a line of going too cartoonish or mean. Consider how Grace and Jack converse. One may expect the likes of Ice Cube to be exceptionally vicious given his previous roles, but as someone who knows a thing or two about music, he speaks with Ross as someone with a long history. He clearly cares for her even if his methods of playing it safe ultimately lead Grace down a road of creative unfufillment. Likewise, Maggie and David have a playful demeanor of a relationship in its early stages for two people really dig the music industry even if it doesn’t seem to love them back.

The High Note, contrary to what the characters desire, plays itself a bit too light and fluffy. It wants us to root for the comradery of Maggie and Grace to prove themselves, but does so with safety mittens. We rarely see the darker side of the music industry or even the lower depths of creative unfulfillment that often comes with the stagnation of age. There are a lot of tougher questions that are narrowly avoided here that I doubt it would surprise many this was directed by Nisha Ganatra who previously directed Late Night, another comedy of two women connecting in an industry which isn’t questioned too far. That being said, for being little more than a warm blanket of women rising in the music industry, The High Note hits more hills than valleys.